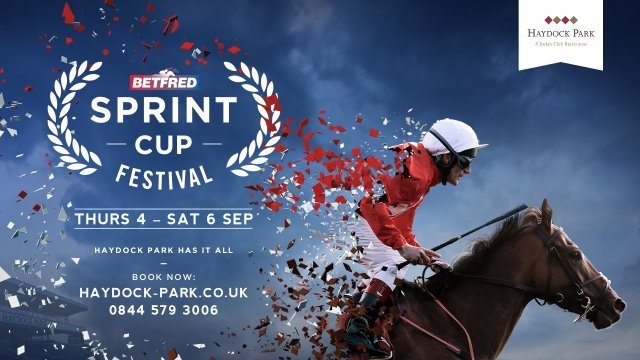 Although the bulk of this season’s flat racing is now behind us, there are still some excellent events left in the calendar, one of those being the mouthwatering Haydock Sprint Cup.  This Group 1 contest is open to horses aged three years and upwards and is run over a trip of six furlongs.  Some of the very best sprinters from around the world are due to line up and the race will be run on Saturday September 6th at Haydock Racecourse.

The Irish have dominated the sprint division this season but it’s specifically the Edward Lynam horses Slade Power and Sole Power who have done the most damage! As things stand, Slade Power may not take part in the Sprint Cup and Betfred are offering him at 3/1 with a run, so if he does not take part, punters get their money back.

The more likely target for Slade Power is to go straight for the VRC Sprint Classic in Australia before being retired to stud.  It will be a shame if the five year old does not race on UK soil again but he has given horse racing fans some fantastic days this year including his wins in both the Diamond Jubilee Stakes as well as the Darley July Cup.

Stable mate Sole Power is three from three in the big races this year and was quite simply breathtaking when winning his second Nunthorpe Stakes at York last time out.  He appears as good as ever at seven years old and is sure to make plenty of appeal at the generally available price of 8/1.

Currently sponsored by Betfred, the Haydock Sprint Cup was first run in 1966 and for me, is one of the most interesting and exciting races of the season.  One of the reasons for this is the fact that the market principles don’t always dominate the race and there is often the opportunity for a slightly lesser yard to capture a rare Group 1 prize.

Dandy Nicholls won this race in 2009 with Regal Parade and Eric Alston was successful in 2006 with Reverence.  Last year, Johnny Murtagh did the steering for Tom Hogan aboard Gordon Lord Byron and that runner has been priced up at 6/1 with bet365 to successfully defend his title.  There aren’t many significant trends for this race but one to keep in mind is solid recent form in Group 1 company.

Hot Streak was a definite eye-catcher in the Nunthorpe last time out and at one stage, I did think he was coming to win the race but ultimately finished just over a length behind the winner Sole Power. Although Kevin Ryan’s inmate does have a little bit to find strictly on official figures, he’s been performing consistently well in the Group 1 sprint races throughout the year and probably deserves to get his head in front and land a big prize.  The 20/1 on offer with Coral looks huge to me, especially when you consider the horse is half that price in some places.  I’ll definitely be backing Hot Streak each way at those kind of odds.

I have my doubts about Slade Power’s participation in the Haydock Sprint Cup as this would be too much of a risk prior to the big money race at Flemington.  Sole Power, on the other hand, should take his chance and I can see no reason to oppose the multiple Group 1 winner when there is plenty of 8/1 available.  Those punters looking for a horse at bigger odds could do a lot worse than supporting Hot Streak at 20/1 with Coral, but get on soon as I don’t expect that price to last.

Back Sole Power at 8/1 with Sky Bet

Back Hot Streak each-way at 20/1 with Coral