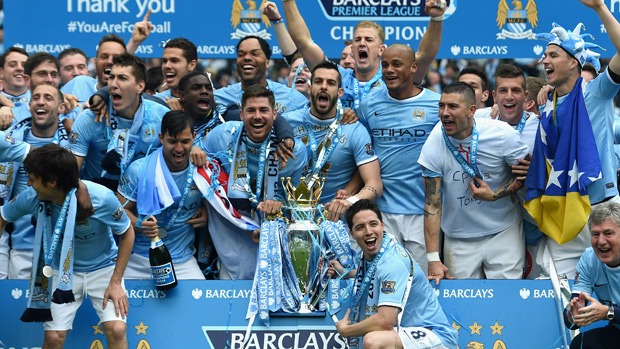 The 23rd season of the Premier League will get under way on Saturday 16th August and it has the potential to provide us with a race for the title that is even more open than the last.

Reigning champions Manchester City again very prominent in the betting but there is quite a difference in opinion over their price. Ladbrokes only go 15/8 about Manuel Pellegrini’s team, but you can get as big as 5/2 with William Hill.

While one firm is willing to stick their neck out slightly where the Sky Blues are concerned, no bookmaker is prepared to go bigger than 15/8 when it comes to Jose Mourinho’s Chelsea side. Last season’s third placed team have made some signings of real intent during the current transfer window including Diego Costa and Cesc Fabregas for big money. Roman Abramovich will certainly be expecting a return on his investment and Mourinho will certainly not want a second season without any silverware.

Liverpool were the surprise package of the 2013/14 Premier League campaign and had it not been for a dramatic collapse at Crystal Palace, Liverpool would have captured the title. Having sold Luis Suarez to Barcelona, it’s difficult to see Brendan Rodgers repeating their success of last season, even though they have brought in a number of big money players to try and fill the void left by the Uruguayan. Suarez was the top scorer in the division last year and his penchant for biting aside, he’s a truly world class striker. Rickie Lambert is a proven goalscorer at this level and a very good player in his own right, but he’s no Luis Suarez. The Liverpool squad does now have plenty of strength in depth, something Brendan Rodgers will need at his disposal if his side are going to challenge on more than one front this season following their Champions League qualification.

While it’s foolish to let pre-season form carry too much weight, I have been impressed with the way Manchester United have been performing thus far under new boss Luis van Gaal. The Dutchman has had limited time with this group of player since leading the Netherlands to a World Cup semi final, but they already look like a much improved side from the one playing for David Moyes during the previous campaign. Utd’s tour of the States ended with a 3-1 victory of Liverpool and that result should definitely give them confidence coming into their opening game of the new season against Swansea City. With no European football to distract them, I fully expect Manchester United to regain a position in the top four this season as well as return to their dominant selves at Old Trafford. Utd are on offer at odds of 5/1 with Betfred to win the Premier League.

A side I believe have a fantastic chance of winning the 2014/15 Premier League title is none other than Arsenal. Now, I realise they choked in tremendous fashion last season, but there were other reasons for their failure. The number of injuries Arsenal sustained to key players during the previous campaign was quite unbelievable. Losing Walcott and Ramsey for such long periods was a massive blow for Arsene Wenger and there was also a huge dip in the form of big money signing Mesut Ozil. The Gunners did manage to bounce back from their disappointing league capitulation however, and land the FA Cup, their first trophy since 2005. That win is going to give this group of players belief, and that is the only thing they have been lacking. The arrival of Alexis Sanchez is huge, as is the capture of Newcastle’s high class full-back Mathieu Debuchy. I’ll be backing the Gunners at 7/1 with Coral, and would not put anyone off doing the same.