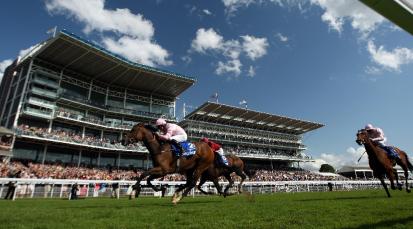 The 2014 Ebor Festival gets under way on Wednesday 20th August and looks set to be a cracking four days of horse racing action.  One of the most prestigious meetings in the flat racing calendar, the Ebor Festival features a number of Group 1 contests, including the International Stakes, the Yorkshire Oaks and the Nunthorpe Stakes.  Some of the very best horses in training will make the trip to York and compete for a serious amount of prize money.

Having first taken place in 1843, the Ebor meeting has grown in popularity over the years and is always complimented by huge crowds and occasionally, decent weather!  An example of when this was not the case was back in 2008 when all four days had to be abandoned due to water-logging. This is the only time in the history of the event that it has had to be called off due to the elements.

Wednesday’s highlight will undoubtedly be the Juddmonte International Stakes, a race which is run over a trip of one mile and two furlongs and is open to horses aged three years and upwards.  First run in 1972, the International Stakes has been won by some huge names down the years including Halling, See The Stars and Frankel to name but a few.

The 2014 renewal will see the Aidan O’Brien trained Australia bid to complete a hat-trick of Group 1 wins this season following his victories in both the English and Irish Derby.  Australia is available at a best price of 8/11 with Paddy Power currently and even though he is odds on, I still think this horse will be a popular choice with the betting public this week.

Trying to stop the Irish raider will be recent King George runner-up, Telescope.  Sir Michael Stoute’s four year old son of Galileo is yet to finish out the first two in nine career starts to date and could well give the favourite something to think about. Mukhadram was just a short head back in third at Ascot and is a 5/1 short to pick up his second Group 1 of the campaign following his Coral Eclipse victory last month. Of the three, it’s very hard to see past Australia, even with the drop back in trip.

Ladies Day takes place on Thursday, with the Lowther Stakes and the Yorkshire Oaks taking centre stage. On paper at least, the Yorkshire Oaks looks very much a one horse race, with the unbeaten three year old filly Taghrooda as short as 1/4 to continue her winning streak.  John Gosden’s Oaks winner is already arguably the horse of the season and this daughter of Sea The Stars could well try and emulate her father by going for the Prix de l’Arc de Triomphe later in the year.

The Lowther Stakes should be a little more competitive, and we have joint favourites at the time of writing in the form of Tiggy Wiggy and Anthem Alexander who are both available at the 5/2 mark.

The Nunthorpe is a race I’m very much looking forward to and the winner of this contest will receive automatic entry into the Breeders’ Cup Turf Sprint.  Consistent seven year old Sole Power has been put in as the 7/2 favourite for the race with Ladbrokes, but opinion is divided over the King’s Stand winner as he’s as short as 9/4 to win this year’s Nunthorpe Stakes elsewhere. Owned by the Power family, Sole Power finished third in the race in 2013 and looks set to be involved at the business end once again.  I was really impressed with the way Take Cover won the King George at Goodwood last time out and I think this in-form sprinter can take the step up to Group 1 level in his stride.

It’s called the Ebor Festival for a reason, and the big handicap of the meeting takes place on the final day, Saturday August 23rd.  The ante post market has been dominated by Sir Mark Prescott’s Pallasator, with the five year old on offer at odds of 10/3 with bet365.

While he could well still be ahead of the handicapper, the value must surely lie elsewhere as there is then a huge jump in the betting to the consistent Havana Cooler who is a 10/1 shot currently.  For me, Luca Cumani’s runner looks an each way bet to nothing and deserves to finally get his head in front this season.

Our best bets for the York Ebor Festival

Australia at 8/11 with Paddy Power (Juddmonte)

Tiggy Wiggy at 5/2 with Betfair (Lowther)

Take Cover each way at 10/1 with Bet Victor (Nunthorpe)