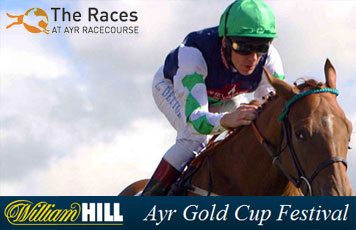 The Ayr Gold Cup takes place this Saturday and sees some of the best six furlong handicappers in the country go head to head.  As is usually the case with this particular event, the betting for the race is wide open, with most firms going 10/1 or bigger the field.  First run way back in 1804, the Ayr Gold Cup is a race that is steeped in history and originally took place at Belleisle.  Only horses that were trained and bred in Scotland were allowed to take part in the first few years of the race’s history and it became a handicap contest in 1855.

While nearly two hundred runners were still entered at the five day stage, only a maximum of twenty seven runners can take part.  Big price winners are not uncommon where the Ayr Gold Cup is concerned, and last year, the race was won by 20/1 shot Highland Colori.  That horse was the 17th winner in succession which was priced at double figure odds.

Currently sitting at the head of the betting for the 2014 Ayr Gold Cup is the David O’Meara trained Watchable.  This four year old chestnut gelding was victorious in a valuable handicap at the Curragh   earlier this month, defeating nineteen other runners in the process.  Watchable is still relatively lightly raced, having had just the seven career starts to date and could well still be open to further improvement.  David O’Meara has achieved amazing things with his stable over the past couple of seasons and this exciting horse should have strong claims come Saturday.  Watchable can be backed at a best price of 12/1 with Ladbrokes.

Another particularly interesting contender for this year’s race is the 105 rated Ninjago from the Richard Hannon yard.  Talented apprentice Cam Hardie has already been booked for the ride and he is able to claim what could be a very valuable five pounds off this four year old’s back.  Cam has had a very successful season, having ridden a total of 43 winners and is now one of the most sought after names in the weighing room.

I’ve always been a fan of Ninjago and I was particularly taken with this horse’s run in the Stewards’ Cup at Goodwood last time out.  Ninjago has mixed it in Listed and even Group company in the past and although he’s been raised a couple of pounds in the weights, Hardie’s claim more than makes up for that.  I’m very sweet on Ninjago’s chances and will be taking the 12/1 that’s generally available.

Last year’s Ayr Gold Cup winner Highland Colori has been put in at odds of 20/1 with Betfred to retain his crown and that is definitely a price that will appeal to some punters.  Andrew Balding’s charge has been in reasonably consistent form throughout the current campaign and is now just four pounds higher than the mark from which he one the race in 2013.

The Richard Fahey trained Heaven’s Guest must also enter calculations following the horse’s fourth place finish last year and has since won a couple of really nice races including the Bunbury Cup in July. 25/1 is on offer across the board for this son of Dark Angel and that looks like a cracking each way bet.