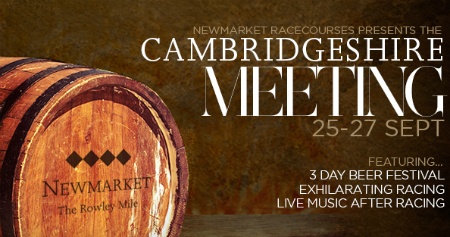 The Cambridgeshire Meeting is one of the most prestigious events in the horse racing calendar during the Autumn months.  All the action kicks off on Thursday 25th September and will run for three consecutive days, with the Cambridgeshire Handicap itself taking place on Saturday 27th.  Newmarket host a number of high profile meetings throughout the year and this is definitely a highlight of their season, with a number of big prize money races taking place over the three days of action.

The majority of bookmakers already have odds available on both the Cheveley Park Stakes as well as the Cambridgeshire and more contests are sure to be priced up the closer we get to this exciting meeting.  Now retired from the saddle having taken up a trainer’s licence, Irishman Johnny Murtagh rode Educate to victory in last year’s Cambridgeshire and that horse is currently a 16/1 chance with William Hill to repeat his success and retain the Cambridgeshire crown.

Run over a trip of one mile and one furlong, the Newmarket Cambridgeshire Handicap first took place in 1839, forming part of what is known as the Autumn Double alongside the Cambridgeshire.  Six different horses have won the race on two occasion, the most recent of which being Rambo’s Hall in 1989 and again in 1992.  There have been three winning favourites in the last ten years, but there have also been winners at 100/1, 40/1 and 25/1 in that same period.  There don’t appear to be any particularly strong trends as far as weight and age are concerned, but the Cambridgeshire winner is more often than not aged between three and six years old.

Currently heading the betting for the 2014 renewal of the Cambridgeshire Handicap is the John Gosden trained Cornrow, who can be backed at a best price of 12/1 with Sky Bet.  Having won this race twice during the last decade, John Gosden knows the type of animal required to be victorious in this competitive handicap and Cornrow certainly has more to come, with just the five career starts under his belt thus far.  Out of the very talented New Approach, this four year old was last seen on the racetrack when finishing third at Ascot in a class 2 handicap.  Cornrow had won three races in succession prior to that effort and lost nothing in defeat at Ascot, beaten just a head and a short head.

The Group 1 Cheveley Park Stakes is run over a trip of six furlongs and is held on the final day of the Newmarket Cambridgeshire meeting.  A race for two year old fillies, the Cheveley Park often sees horses that run in the race go on to compete in the 1,000 Guineas the following year.  2009 winner Special Duty was the last filly to complete that particular big race double. 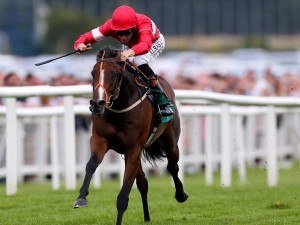 Richard Hannon’s talented filly Tiggy Wiggy sits at the top of the market for the 2014 renewal of the Cheveley Park and is an 11/8 chance to build on her five victories thus far this season.  I was very taken with the way this filly won the Lowther Stakes at York last month and she definitely deserves to take her chance in Group 1 company.

Cursory Glance finished second to Tiggy Wiggy on that occasion and she has since been victorious in the Group 1 Moyglare Stud Stakes. This may well mean that Cursory Glance has improved since her run in the Lowther, but I would still take the Hannon filly to come out on top here.

Back Cornrow each way at 12/1 with Sky Bet (Cambridgeshire)

Back Tiggy Wiggy at 11/8 with Betfred (Cheveley Park Stakes)