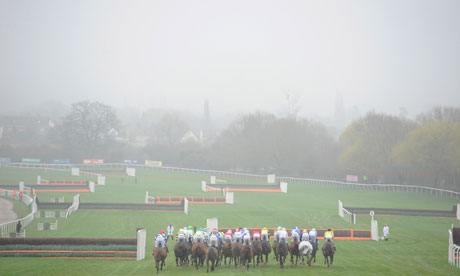 An important meeting in terms of the build up to the Cheltenham Festival takes place this weekend, as the Gloucestershire track hosts a seven race card which includes a total of five graded races.

Things get under way at 12:40pm, when some of the leading fancies for the Triumph Hurdle will do battle in the Grade 2 Finesse Juvenile Hurdle.  The Nicky Henderson trained Peace & Co is likely to be a warm order here, having been particularly impressive on debut when victorious in the Bet365 Summit Juvenile Hurdle at Doncaster.  The four year old won by a full 19 lengths from a decent marker in the shape of Donald McCain’s Starchitect, and this son of Falco could be absolutely anything.

Arguably the biggest danger to the favourite could well be his stablemate Bivouac, a horse who now has a two from two record over hurdles and looks another exciting prospect.  Paddy Power have put Peace & Co in at odds of 4/6, while Bivouac is available at 7/1 with the same firm.  Starchitect would appear to have little chance of reversing the form with Peace & Co, and is a 20/1 chance.

The galliardhomes.com Cleeve Hurdle should give us some clues as far as the World Hurdle is concerned, but this particular contest appears to be wide open.

Saphir Du Rheu, from the Paul Nicholls yard, reverts back to the smaller obstacles having fallen in the Kauto Star Novices Chase when last seen on Boxing Day.  This six year old had previously been seen to good effect over hurdles, having achieved a mark of 165, and is still relatively unexposed.  The bookmakers are taking no chances on Saphir Du Rheu, with Coral as short as 2/1 about the horse winning come Saturday afternoon.  Saphir Du Rheu is currently the 10/1 joint second favourite for the World Hurdle, and his price will contract if victorious in this Cleeve Hurdle.

Paul Nicholls knows exactly what it takes to win the Cheltenham Festival showpiece, having trained Big Buck’s to numerous successes. If you like the chances of Saphir Du Rheu in the World Hurdle, take a price before this weekend.  There are other more exposed rivals in this field such as Reve De Sivola and At Fishers Cross, and Saphir Du Rheu will really need to be victorious if he is going to be a genuine World Hurdle contender.

Some of the leading Gold Cup and Ryanair Chase fancies will do battle in the Betbright Cup Chase this weekend, and it’s the David Pipe trained Dynaste who has been put in as the 5/2 favourite with Betfred for this intriguing contest.  The big grey is a model of consistency, and ran an excellent race to finish second to Silviniaco Conti in the King George on Boxing Day.  Poor Dynaste has seen the back of that rival on his last three starts, but that is the best form on offer in the race, and there is no Silviniaco to contend with on Saturday.

The main threat to Dynaste’s chances looks likely to come from this season’s Hennessy Gold Cup winner, the Oliver Sherwood inmate Many Clouds.  A second season chaser, Many Clouds has shown major improvement this term, and has emerged as a leading Cheltenham Gold Cup contender following his victory at Newbury in November.  I’m very keen for this horse to win this Betbright Chase, as it will make for a more interesting Gold Cup, but I fear that Dynaste may have just too much for Many Clouds at level weights.

Back Bivouac each way at 7/1 with Paddy Power

Back Dynaste at 5/2 with Betfred