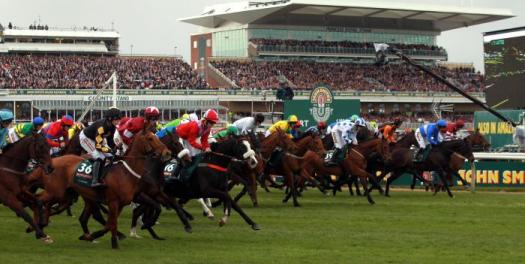 There isn’t long to go until the 2015 Aintree Grand National gets under way, and racing fans all over the UK will be keen to find that big priced winner to give them a healthy profit on the race.  While there have been three relatively fancied horses win the Grand National in the past decade, there have also been some very big priced winners, including Mon Mome at 100/1 in 2009 and 2013 champion Auroras Encore was successful at odds of 66/1.

The National has previously been a strong race where the statistics and trends are concerned, but those have gone out the window somewhat in recent times. The last three winners of the race have met very few of the trends, and Mon Mome was completely ruled out by the experts when upsetting the odds six years ago.

All eyes will be on Tony McCoy coming into the race as he rides favourite Shutthefrontdoor for Jonjo O’Neill, and that horse certainly has the form in the book to go well for the retiring champion jockey. That being said, it may well be more fruitful to back a few outsiders in this year’s Grand National, and here we will try and point in the the direction of some of the more talented runners who are available at big prices.

The Oliver Sherwood trained Many Clouds was well fancied for last months Cheltenham Gold Cup, but the eight year old is generally available at 33/1 for the 2015 Grand National, and that price is just too big for me.  Although this second season chaser was only able to finish sixth in the aforementioned Gold Cup, that wasn’t a bad effort at all in the Grade 1 contest, and Many Clouds has been performing with credit throughout this national hunt season.

His victory in the Hennessey Gold Cup at Newbury came in quite testing conditions, and showed this horses ability to stay a trip. Many Clouds was doing his best work at the business end of that race, and if he can handle the bigger fences at Aintree, this classy individual must hold each way claims.

Running for the Tom George yard, Saint Are is another horse I feel is a big price at the 33/1 mark.  Last seen when winning at Catterick in February, Saint Are has really improved his jumping this year and has been kept fresh for this tilt at the National by his trainer.

This nine year old son of Network ran a cracker in the Becher Chase at Aintree over the National course earlier in the season. He finished in third place on that occasion and I think that run is a huge positive as far as the horse’s chances of success in the Grand National itself are concerned. Off his current weight of 10st 6lbs, Saint Are must have an excellent chance of running into at least a place come Saturday.

Finally, for those of you looking for a horse at massive odds, Raz De Maree could well surprise a few people at the 66/1 mark.  Having finished eighth in last year’s renewal, this ten year old trained by the Hughes family gets into the 2015 Grand National off a mark which is a couple of pounds lower than last year, and could well take advantage of that fact.

Raz De Maree comes into the race off the back of an excellent run in the Midlands Grand National when finishing second to Goonyella, and is certainly worth an interest at the current price.  Please note that Raz De Maree is currently the 3rd reserve in the race and will need 3 horses to drop out between now and the start of the race if he is to get a place in Grand National 2015, so keep your eyes peeled and if he gets a start then get a good each way bet placed on him.

Back Many Clouds each way at 33/1 with William Hill

Back Saint Are each way at 33/1 with William Hill