The Newmarket July meeting kicks off on Thursday 9th and there is plenty of high class action in store over the three days.  We begin with the Group 3 Bahrain Trophy, Friday’s highlight is the Falmouth Stakes, while the Group 1 Darley July Cup takes centre stage on Saturday.

The Charlie Hills trained Muhaarar looks set to be all the rage for that particular contest, with the bookies pricing up the talented three year old as short as 9/4 to take this prestigious contest. Let’s take a more in depth look at a couple of the big races.

A part of the British Champions Series, the Qipco Falmouth Stakes is a Group 1 race for fillies, which is run over a trip of one mile.  With first place prize money of £123,344 up for grabs, this is sure to be an ultra competitive contest, and one which sees some of the top fillies from Europe do battle.

Bet365 have put the Jim Bolger trained Lucida in as their 3/1 favourite here, this daughter of Shamardal having been seen most recently when finishing in third place in the Coronation Stakes at Royal Ascot.  Beaten just three quarters of a length on that occasion, Lucida lost little in defeat and definitely appears to be improving at a rate of knots.

There are a number of possible dangers to the favourite, including French raiders Avenir Certain and Fintry, but the chief threat could well come from Sir Michael Stoute’s Integral.  While she was disappointing behind Amazing Maria at Royal Ascot, Integral won this race twelve months ago, and is still the highest rated filly in the contest.  Her well-being obviously needs to be taken on trust, but the return to Newmarket could well bring out the best in Ryan Moore’s mount, and I’m happy to take the 9/2 about Integral with William Hill.

Back Integral at 9/2 with William Hill

The Darley July Cup is one of the big sprint races of the flat calendar, and is a contest which generally attracts a high class field.  Based in Australia, Brazen Beau has remained in the UK since his excellent performance when finishing second in the Diamond Jubilee Stakes at Royal Ascot behind Undrafted, and has to enter calculations here.  Currently available at a best price of 5/2 with Paddy Power, Brazen Beau would go very close indeed if able to produce a repeat of his Ascot run, and it would be no surprise to see the four year old go very well once again under James Doyle.

Just edging favouritism at 9/4 generally is recent Commonwealth Cup winner Muhaarar.  So impressive back in June when beating the highly rated Limato by over three lengths, Charlie Hills’ charge has had just the eight career starts and is still open to further improvement.  Most firms go 12/1 bar these two, and it does appear to be a two horse race on the form book.  While Muhaarar did do it nicely last time out, I just have the feeling that Brazen Beau can make amends for his narrow defeat in the Golden Jubilee and land this prize for his Australian connections.

Back Brazen Beau at 5/2 with Paddy Power

Coral have got a great offer for new customers for the Newmarket July Meeting, they are offering for Thursday’s racing:

This equates to a Bet £10 Get £35 in free bets offer.  If you are interested in taking up this offer you can sign up at the Coral July Meeting Offer Page or click the image below. 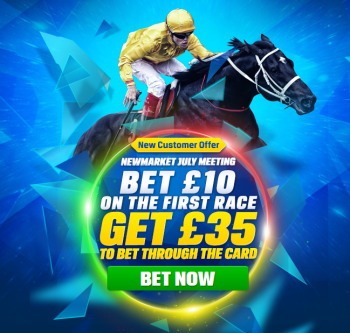