The third Major of the 2015 golf season is set to take place at St Andrews this week, as the world’s finest players head to Scotland for The Open Championship.  All eyes will no doubt be on young American Jordan Spieth as he attempts to land his third Major championship in succession, and stay on course to complete what would be a quite incredible grand slam. While there is still a long way to go as far as the slam is concerned, Spieth comes into the Open in fantastic form, and is the bookies favourite this week, with bookmaker Bet365 going 6/1 about the twenty one year old.

World number one Rory McIlroy won the Open Championship twelve months ago at Royal Liverpool, but will be unable to defend his crown this year due to a freak ankle injury suffered while playing football.  Following advice from none other than Tiger Woods, McIlroy has taken the decision not to try and rush a comeback, and will instead give himself time to recover fully and likely be ready for the USPGA.

Speaking of Tiger, the three time winner has been showing signs of a resurgence in recent weeks, and it would be no surprise to see Woods be involved at the business end of the tournament. Bet365 go 30/1 about the 2006 champion.

This will be the 29th time that The Open Championship has taken place at St Andrews, the last occasion being 2010 when South Africa’s Louis Oosthuizen was a runaway winner.  Standing at 7,305 yards in length, the Old Course at St Andrews is one of the oldest golf courses in the world and is particularly well known for its large double greens.

Each of the eighteen holes on the Old Course have their own names, and the Swilcan Bridge which spans the 1st and 18th is one of the most iconic features of any golf course in the world.  Hole 17 is known as The Road Hole, and includes a blind tee shot, a huge sand trap in front of the green, as well as a tarmac roadway behind!  St Andrews is consistently ranked as one of the very best golf courses in the world, and is the venue where every top player wants to win due to its incredible prestige and illustrious history.

Louis Oosthuizen was victorious the last time that The Open Championship took place at St Andrews, and the seven time European Tour winner has to enter calculations once again here.  Oosthuizen would appear to be approaching somewhere near his best once again following a few years in the wilderness thanks to a number of injury problems, and his second place finish at last month’s US Open is certainly encouraging.  I think the return to St Andrews can bring out the best in Louis, and he should give punters a good run for their money at this 144th Open.

At slightly bigger odds, Paul Casey has a similar profile to Oosthuizen and should not be ignored this week. Casey has himself suffered from injury problems over the past few seasons, but having overcome those, he is now challenging the very best players in the world once again.  With six top ten finishes in his last twelve starts, Paul Casey should arrive in Scotland full of confidence and I’m happy to take the 33/1 generally available.

Back Louis Oosthuizen each way at 25/1 with Coral

Betting Offers for The Open 2015

There are a few bookies doing minor odds boosts for this year’s Open Championship, but the best offer we’ve found is from Coral who are offering in-form Jordan Spieth at massive odds of 8/1 that he finishes in the Top 10!  Spieth is only 6/1 to win the tournament outright so the 8/1 for a top 10 finish is a really good price.  Get the offer by clicking the image below: 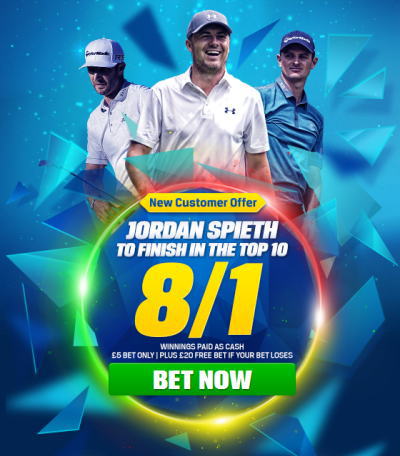