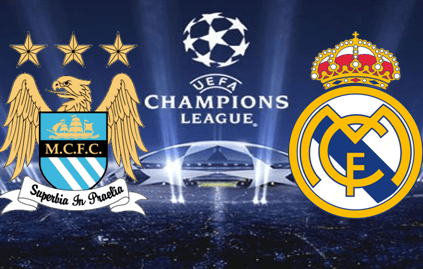 Manchester City take on Real Madrid in the Champions League Semi-Finals in a massive tie which will have huge implications on both team’s seasons.  Both teams have had tricky seasons, but both appear to be finding some form at a crucial stage of the season.

Real Madrid are favourites for the first leg at the Etihad Stadium, which isn’t really surprising as they do boast a potent strike force of Ronaldo, Benzema and Gareth Bale.  In fact throughout the team Real Madrid ooze class, with Toni Kroos pulling the strings in midfield and over 100 goals scored in La Liga this season.

City do have a chance, particularly in the first leg at home and will be looking to their world class players Sergio Aguero and Kevin De Bruyne to create problems for Real Madrid.

If you’re looking for a special betting offer for the match, then Coral have enhanced Real Madrid to 8/1 odds to win the match for new customers, so sign up using the coupon below if you fancy a bit of that huge price.

Real Madrid started the season with Rafa Benitez in charge, but his pragmatic style of play and need for total tactical discipline never really seemed a particularly good fit for this Real side.  The side is brimming full of world class ‘Galacticos’ and the Madrid crowd demanded good style as well as results.  Though Rafa wasn’t a disaster at Real, he never seemed to have the crowd fully on board and when league results took a turn for the worse, the fans made their feelings known as Rafa was replaced by club legend Zinedine Zidane.

Since then, Real have got gradually better as Zidane has settled into his first managerial job at one of the most demanding crowds in world football.  Results have taken such an upturn that Real are now right back in title contention in Spain, only one point behind league leaders Barcelona after the weekend’s results.  Zidane has got Bale and Ronaldo firing on all cylinders again and City will be aware that they face a very tough task to contain those two plus Benzema.

That being said, Real did struggle against Wolfsburg in the last round, losing the first leg 2-0 in Germany only to pull it all back in the second leg with a 3-0 home win.  The vulnerabilities they showed in those two games mean that City will hope for some good chances to get goals.

City have also had a recent upturn in form, coinciding with the return of Kevin De Bruyne who has been crucial for them, especially in the two matches against PSG in the Quarter Finals of the Champions League.  Sergio Aguero has also seemed to finally get a good run of injury-free games and is now looking sharp and getting back towards being the world class striker we all know he can be.

The performances of Aguero, De Bruyne and probably Joe Hart will be absolutely crucial to how City fare in this massive Semi-Final which is the furthest Man City have ever got in the Champions League.  The defence is still a massive worry for them, with Kompany too often injured and replacements such as Mangala and Otamendi often flattering to deceive.  The combo of Fernando and Fernandinho in central mdifeld has seemingly helped shore up City’s leaky back line but Real Madrid are definitely a step up from anything else City have faced this season.

Whilst City did well to get past PSG in the last round, it could be argued that PSG have suffered due to playing in a very poor French league, so it’s uncertain how good the PSG side really are – this next round will tell us much more about City’s standing among the big European clubs.

Real Madrid are big favourites to qualify over the two legs at odds-on of 2/5 with Ladbrokes and Stan James.  We feel this is a little bit of a short price, particularly with how Real struggled in the last round.  City are clearly the outsiders out of the sides left in the competition, but we do feel that if they can get a two goal lead in the first leg then they might be able to nick an away goal at the Bernabau and possibly scrape through.

On paper Real have the much better side though, but we do think there could be some value in a small stakes punt on City to qualify at 2/1.

It seems likely that Ronaldo is going to feature heavily in this tie, he always seems keen to perform well against City after his spell at United and usually gets his name on the scoresheet in most matches anyway! 10/3 is not a bad price for the Portuguese superstar, but we like the value offered by Kevin De Bruyne at 8/1.

He has been massive for City in the really big games and seems ready to go to that next level where he could be known as one of the top 10 world class players in the world.  Games like this will obviously decide that, but with a knack of coming up with important goals and with City being at home, we think 8/1 gives good value to anyone looking at the first goalscorer market.