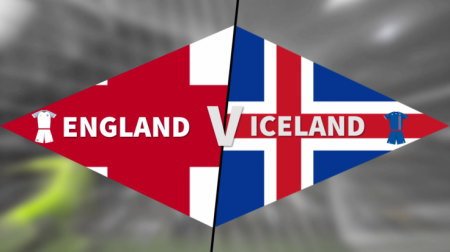 When Arnor Ingvi Traustason scored Iceland’s last minute winner against Austria it sparked wild celebrations amongst Iceland’s players, staff and fans. However, when they looked at the goal in the cold light of day Iceland can be forgiven for wishing that they didn’t score it.

Winning three points instead of one promoted Iceland from third in Group F to second. That jump took them from the easier half of the draw into the much more difficult side and set up a round of 16 match against England. Iceland have had a wonderful time in France so far but it would be a major shock if they are able to navigate a route past England to the quarter-finals.

England have not yet hit top gear at the European Championships but they are not too disheartened with their performances. Manager Roy Hodgson believes that his team have lacked a little bit of luck in front of goal and they dominated the games against Russia, Wales and Slovakia.

The bookies all have England as the odds on favourites for the match. England are currently 10/1 to win the tournament outright with Sky Bet while Iceland are the lowest ranked nation in competition. Anything other than an England win inside 90 minutes would be a real shock but make no mistake, Iceland are going to make it as tough as possible for the Three Lions.

Nobody thought that Iceland’s inclusion in Euro 2016 would provide anything other than a welcome bit of diversity in the group stage. It is true that their fans have lit up the tournament but their players have shown that they too belong at this level. Matches against Portugal, Hungary and Austria went by without defeat as the defensive game plan devised by joint managers Lars Lagerback and Heimir Hallgrímsson worked a treat.

The Iceland backroom staff will have watched England’s inability to breakdown Slovakia with great relish. There is no reason for Iceland to approach the match any differently to their first three games so England will have to remain patient. If Hodgson’s team can work the ball well and create good chances for the frontmen, they will get the win at 11/2 with Stan James but it’s not going to be given to them.

Coral are offering a MASSIVE 10/1 for England to beat Iceland (in 90 mins) for new customers.  If you visit our Coral Promo Code page between 2pm on Sunday 26th June and 8pm Monday 27th June, then you will be able to pick up this offer exclusively at our site.

Iceland’s number one aim for the game will be keeping a clean sheet. They sit back, defend in numbers and then look to pounce on any counterattacking and set piece opportunities. That approach is reflected in the selections towards the top of the bookies’ Correct Score markets.

Each of the shortest odds options include two goals or fewer and we are expecting a tight game which reflects those prices. One of the most worrying things for Hodgson in this tournament has been England’s inability to score a goal in the first half of any of their matches. They are going to have to start quicker in order to have any chance of success in the latter stages of Euro 2016 but against Iceland they should be able to win even with another frustrating first 45 minutes.

As the game wears on, the Icelandic players will tire given the amount of defensive work they’re going to have to put in and their heads will surely drop if and when England make a breakthrough. So, instead of backing the favourite selection of England winning 1-0, the best option looks to be 2-0 to England at 11/2 with BetVictor.

There was a fair amount of criticism levelled at Roy Hodgson for his decision to make six changes for England’s match against Slovakia. It would be unfair to call the XI that started the final game of the group stage a second string team but England’s attacking shape was definitely affected.

Hodgson will need all of his best attacking players on the pitch to break down the stubborn resistance of Iceland and that should mean a recall for Harry Kane. The Tottenham striker made it very clear to the press this week that he is not tired and is ready to put the work in for England in order to score his first goal of the tournament. Kane is England’s best striker and could well score the first goal of the game at odds of 9/2 with Bet365.

However, the player to bet on is Wayne Rooney at 7/1 with Paddy Power. The England captain has looked good in a deeper position and had chances in the first two games after arriving from deep. As Iceland sit back and look to limit space for the England attack, Rooney’s clever movement and ability to score from long range could be just what England need.

Wayne Rooney to score first at 7/1 with Paddy Power