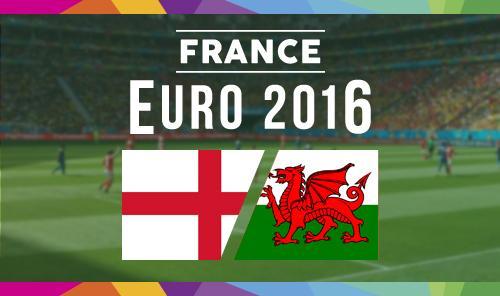 Ladbrokes have got a great signup offer for the England vs Wales match on Thursday 16th June in Group B at Euro 2016.  They are offering a HUGE 6/1 for England or an even bigger 12/1 for Wales to win the match. 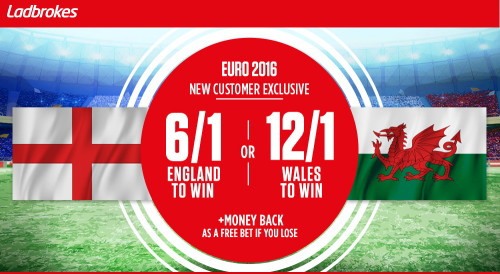 The offer is available from 8.00am on Wednesday 15th June 2016 and will run until the match kicks off at 2.00pm on Thursday 16th June. These offers are always popular so we recommend getting in quickly.

England and Wales are hardly strangers – they’ve played each other over 100 times – but there is something special in the build-up to their match on Thursday afternoon. Ever since the two were drawn together in the Group B of Euro 2016 both sides have been looking forward to doing battle on one of the biggest stages of all. The game has been given even extra significance given that Wales won their opening match in France whereas England surrendered a lead to only take a point against an average Russia team.

England and Wales fans may be happily singing along together in Lille but the atmosphere between the two squads is decidedly more frosty. Gareth Bale has been the antagoniser in chief for Wales, suggesting that England don’t have as much pride as their Welsh counterparts. That’s a subjective point to argue but Bales’ assertion that not a single England player would get into the Wales squad is more than a little farfetched.

With both national and professional pride and vital points to be fought over we are expecting a real cracker of a game.

Despite the differences in the opening day results between these two, England go into the game as the odds-on favourites.  The Russia result was poor but the performance from Roy Hodgson’s men was actually pretty encouraging.  England fans went into Euro 2016 with much positivity about this young, exciting England side and in many ways they didn’t disappoint.  Wayne Rooney worked well in midfield and the forwards generally used the ball intelligently.  They are going to have to improve in terms of how clinical they are in front of goal but with some shooting practice they should feel confident about their chances.

The best price that you can get about England winning Thursday afternoon’s match is the 3/5 that Stan James are offering.  England are the fair favourites but it would be silly to completely write off the chances of Wales pulling off an upset.

At odds of 13/2 with Betfair, Wales are sure to have plenty of backers.  In Gareth Bale they will have the best player on the pitch but Chris Coleman’s team are much more than the sum of their parts.  Wales proved in their qualifying campaign that they are very capable of getting results when they go into matches as the underdogs.  Coleman has them terrifically well organised at the back and they have all the necessary pace and power to score quick goals on the break.

If you think that this close looking game is going to end with another draw for England you can back it at 13/4 with 888Sport.  That’s a decent price but you get the feeling that there is going to be a winner in this one as both teams seek to inflict a painful blow on their neighbours.

Just like the markets before their game against Russia, England dominate the shortest priced correct score selections.  The message from the bookies is clear, Wales are up against it and will need their best stuff to get a result against England.

If the game plays out to form, England are going to get the win.  However, there is absolutely no chance that Wales are going to roll over.  They will pose a constant threat to England throughout the game so if you are having a correct score bet for the match it makes sense to include a Wales goal in your selection.  The best looking option looks to be the 17/2 that BetVictor are quoting on England winning 2-1.

The First Goalscorer market looks like one of the most competitive betting heats in the 100+ markets that the bookies are quoting.  England are sure to make a few tweaks to their team after neither Adam Lallana nor Raheem Sterling impressed so that could see Jamie Vardy and/or Daniel Sturridge’s chances of notching the first goal increase.  Wayne Rooney had a couple of decent chances against Russia despite playing in midfield and his desire to score on the biggest stages cannot be ignored.

However, it could well be worth siding with Gareth Bale to score the first goal of the game at enticing odds of 13/2 with BetVictor.  Wales will be confident that they can defend a lead should they get one and if anybody is going to grab that lead for them it is their best player.

England to win at 3/5 with Stan James

Gareth Bale to score first at 13/2 with BetVictor