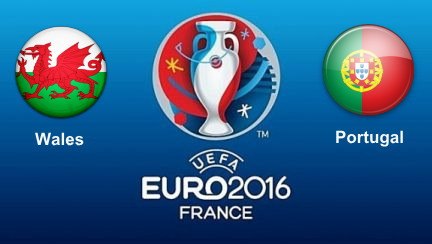 Before Wales’ game against Belgium people were making a big deal of the fact that Chris Coleman’s team were the last British team standing in Euro 2016.  One game later and they are now being talked about as potential winners of the tournament.  That’s how good Wales have been.

No other nation at the tournament has displayed the same sort of team spirit and willingness to fight for one another as Wales.  They certainly have some very talented footballers in their ranks but it is that unquantifiable spirit that has really spurred them on to the semi-finals.  It is much harder to put your finger on how Portugal have made it this far.

The Portuguese have still yet to win a match inside 90 minutes at the tournament and yet they remain alive in the competition.  In Cristiano Ronaldo they have one of the best footballers of all time but he has not been anywhere near his best which is also true of his teammates.  Portugal have laboured massively at times and have come in for some serious criticism for their style of play which has bordered on boring too often over the past couple of weeks.

Still, we are expecting a thrilling match at the Stade des Lumières on Wednesday night. Neither team genuinely expected to make it this far and can give it their all with glory just two games away.

Portugal are the favourites for the match with every single bookmaker but they are odds against which shows that Wales’ chances have by no means been written off.  On paper, these two sides look pretty well matched. Portugal have more players plying their trade in the top leagues of Europe but the likes of Hal Robson-Kanu and Sam Vokes have stepped up to the plate when required.

Wales’ odds would surely be shorter were it not for suspensions to a couple of key players.  Ben Davies will be a big miss from the defensive three that Coleman likes to employ but the biggest miss is Aaron Ramsey.  The Arsenal midfielder has worked brilliantly in the middle of the pitch alongside Joe Ledley and Joe Allen.  His ability to switch the play and bring the ball forward is not present in any of the options to replace him so Coleman has his work cut out to come up with a winning plan.

James Collins is likely to fit into the defence with relative ease which will be a big plus for Wales.  They have shown an ability to dig deep and defend well when needed and they will still have the fantastic pace and power of Gareth Bale to call on.  They are the underdogs but it would be no shock to see them make the final at odds of 10/3 with Stan James.

Coral 10/1 Offer for Wales To Qualify

Coral have got a great special offer for new customers, get huge enhanced odds of 10/1 for Wales to qualify by any method (includes if they win on pens).  Simply click the coupon or banner below to get the offer. 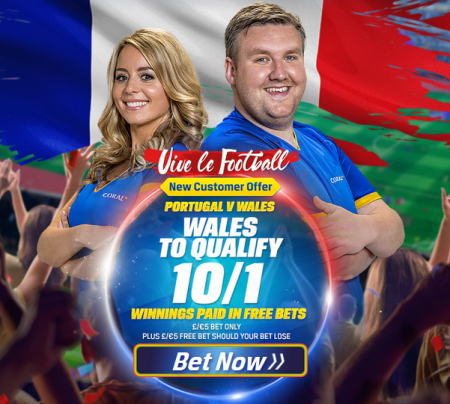 All you need to do is sign up with Coral, bet £5 on ‘Wales to Qualify 10/1’ in the ‘My markets’ section and if Wales win you will receive £50 of free bets in your account.  If your bet loses, you will still receive a £5 free bet, so you can’t lose with this offer.

Portugal have been derided for the lack of goals in their games (save for the 3-3 draw against Hungary) but they are going to have to score to get past Wales.  If Bale gets any space he will be able to exploit it and up front, both Robson-Kanu and Vokes are decent target men if given the right service.

The tone of the match will be set early on.  Either the pressure of the situation is going to get on top of the players and there will be yet another slow start or they will relish the chance to show what they can do on such a big stage.  Wales look the most likely team to attack the game with positivity and if they begin well they could force Portugal to attack.  That makes the odds of 15/1 that BetVictor are quoting on Wales winning 2-1 look like very good value.

Both Portugal and Wales have been called one-man teams at times and the two main men are right at the top of the First Goalscorer Market.  Cristiano Ronaldo is the favourite at 16/5 with Paddy Power while his Real Madrid teammate Bale is a best price of 11/2 with BetBright.  As we have seen, both Ronaldo and Bale have a strong support cast but it makes sense to bet on one of them to score the first goal of the game.  As Wales are sure to be the most positive side, try a bet on Bale to be the man to break the deadlock.

Gareth Bale to score first at 11/2 with Stan James