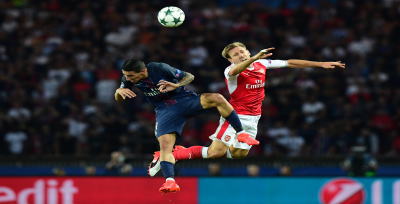 Both Arsenal and PSG were relatively happy when the draw was made for the Champions League group stage. They knew that their chances were very good against FC Basel and Ludogorets and so it has proven to be. With just four games played, Arsenal and PSG are assured of their place in the knockout stage of the competition. That makes their game on Wednesday night almost a straight shootout for top spot in Group A.

Having been knocked out of the Champions League at the round of 16 in each of the last six seasons, Arsenal will be desperate to finish first and get an easier draw in the next round. If they do finish top, you’d have to say they deserve it.

Not only have they played the sort of free flowing football that Arsene Wenger’s teams are renowned for but they’ve also shown real fight and tenacity. The Gunners needed those qualities in their very first match when they managed to earn a point in Paris despite falling behind to a Edinson Cavani goal in the very first minute.

Will Arsenal show a similar level of desire and get something out of the return fixture or will PSG continue to improve under new manager Unai Emery?

Arsenal’s strong recent form and their home advantage makes them the bookies’ favourites. But, at odds against, they are by no means viewed as certainties to get the win.

PSG struggled for form (by their incredibly high standards at least) in the early days of Unai Emery’s tenurship but they are improving all the time. The Parisians have closed the gap at the top of Ligue 1 and are now looking to take their domestic form into Europe. In Emery, PSG have a manager who knows exactly what it takes to win European silverware so they’ll know just how important it is to finish top of Group A.

Make no mistake, Arsenal are going to have to be at their very best to beat PSG. They’ll certainly have to improve on their lacklustre performance at Old Trafford on Saturday afternoon. While Arsenal were outplayed in Manchester, PSG ran out comfortable 2-0 winners against Nantes. The confidence and quality of Emery’s team makes it hard to see them losing so the value bet looks to be the draw at 12/5 with Bet365.

Arsenal and PSG have both been among the goals so far in Europe. The Gunners have 12 goals to their name in just four matches while PSG have found the back of the net nine times already. They will find goals harder to come by against one another than they did against FC Basel and Ludogorets but the quality of the attacking options available to Wenger and Emery makes goals a high probability.

As we’ve seen, both teams are very keen to finish top of Group A and a draw is of little value in that regard. We should be expecting both managers to put out attacking teams and for the players to rise to the occasion.

The 1-1 draw may be the favourite selection in the Correct Score market but it could be worth taking the 14/1 that William Hill are quoting on the game ending 2-2.

Arsenal fans were very worried over the last week as news emerged from South America that Alexis Sanchez had suffered a muscle tear. Thankfully for Gunners fans, Arsenal and Sanchez decided that the club’s top scorer was fit enough to start against Manchester United on the weekend. Sanchez has become perhaps Arsenal’s most important player but there are those who think that Wenger’s insistence on playing the Chilean international is hampering his form and making him prone the injury.

Sanchez’s fitness concerns could be good news for Olivier Giroud. The big Frenchman has been much maligned over the years but he actually has a very impressive goals to game ratio and proved his worth once again with a late header at Old Trafford. Giroud has surely done enough off the bench to warrant a place in Arsenal’s starting XI and therefore looks a good First Goalscorer bet at 5/1 with William Hill.

Olivier Giroud to score first at 5/1 with William Hill