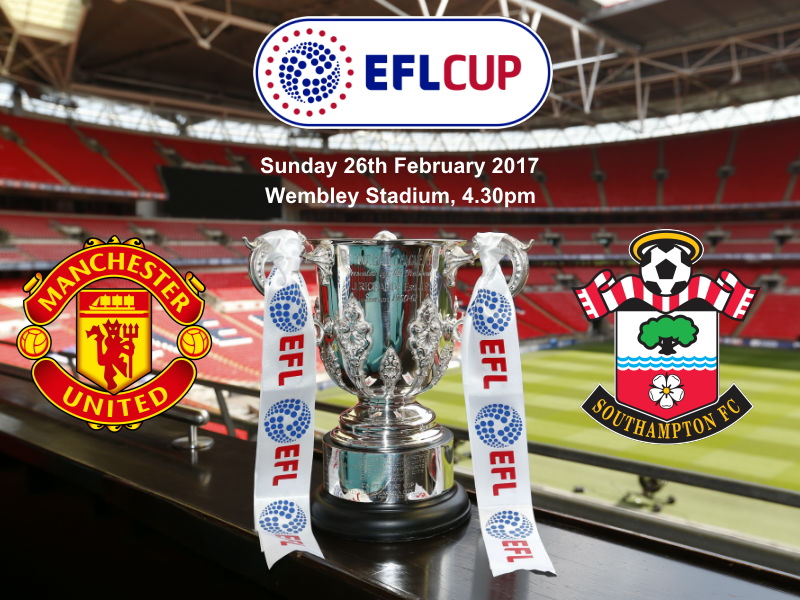 The Wembley Way will be packed on Sunday afternoon as fans of Manchester United and Southampton head to the national stadium for the first piece of silverware of the season.

The League Cup underwent a rebranding in the summer to try and rejuvenate the competition. We ended up with the EFL Cup and the tournament’s organisers will be delighted to see it conclude with an all Premier League final.

This may be down towards the bottom of the priority list of many top flight clubs but it’s a competition which Jose Mourinho has always treated with due reverence. He used the League Cup as a springboard to bigger and better things in both his spells as Chelsea manager and is looking to do likewise with Man Utd.

For Southampton, the EFL Cup represents their best chance of playing European football next season. It’s been an up and down first season in charge for Claude Puel and their Premier League form is not remotely good enough for a finish in the top six.

The Saints’ form in this competition, however, has been much better. Puel’s men have come up against top flight sides in every round en route to the final so are fully deserving of their day out at Wembley. The question is, can they win the League Cup for the first time or will United win it for a fifth time?

The bookies make Man Utd the odds-on favourites for Sunday’s final. That’s a fair assessment when you compare the two teams’ form this season and the fact that Southampton have only beaten United twice since 2004.

However, it’s too simplistic a reading of the game. You have to consider the situation in the here and now. Southampton have not played a match since 11 February. That’s 12 days off between that 4-0 win over Sunderland and the EFL Cup final. In that same spell, United have played three times including away in France on Wednesday night. Fatigue is sure to be a factor, especially in the closing stages of the match.

Therefore, it could well be worth shunning the odds available in the Outright Betting Market and instead take the 17/5 that 888Sport are quoting on Man Utd winning a match in which both teams score.

It seems clear from the favourite selections in the Correct Score Market that the bookies are not expecting too much from Sunday’s final in terms of goalscoring. That may not be a sensible conclusion.

While Southampton have managed the remarkable feat of getting to Wembley without even conceding a goal, Man Utd have scored in all of their EFL Cup matches thus far. With all of the big game experience in United’s ranks, you feel they will continue that scoring run while Southampton also have goals in their team.

Therefore, the odds of 8/1 that 888Sport are quoting on Man Utd winning 2-1 look well worth taking if you’re thinking of a play in the Correct Score Market.

The top of the First Goalscorer Market is simply dominated by Man Utd players. Southampton’s new signing, Manolo Gabbiadini, is the only Saints player in the top eight selections which tells you a lot about Man Utd’s strength in depth in attacking positions.

The Red Devils may have to cope without Henrikh Mkhitaryan who was subbed off with a hamstring problem against St Etienne but Mourinho has a great choice of alternatives in the shape of Anthony Martial, Juan Mata and Marcus Rashford.

Those players will all cause Southampton problems with their pace and technique but the man who is most likely to grab the game’s first goal is Zlatan Ibrahimovic.

This is exactly the scenario for which Ibrahimovic was signed by United. He is a proven winner who doesn’t shy away from the biggest stages. The big Swede is also in amazing goalscoring form with 15 goals in all competitions since coming to English football. At odds of 7/2 with Sky Bet, Ibrahimovic is the man to back in the First Goalscorer Market.

Zlatan Ibrahimovic to score first at 7/2 with Sky Bet