There are some very special meetings in the National Hunt racing calendar but there’s nothing quite like the Cheltenham Festival. From the moment early on Tuesday afternoon that the famous Cheltenham roar is first heard to the final furlong on Friday, it’s wall-to-wall world class racing.

Save for injury, the best horses over both hurdles and fences will be making an appearance at Cheltenham this year. Star horses from the biggest stables will all be doing battle for honours at the Festival with the traditional rivalry between those from Britain and those who come over from Ireland.

With so many betting options available, let’s have a look at picking some winners from each day of the 2017 Cheltenham Festival.

The feature race for the first day of the Cheltenham Festival is the Champion Hurdle. It’s the biggest hurdle race on the National Hunt calendar and we look to be in for a competitive renewal this year.

Three of the four last Champion Hurdles have been won by the bookmakers’ favourite which will be music to the ears of trainer, Willie Mullins. He’s got the current favourite, Yanworth, and the seven-year-old’s going to take some stopping.

Yanworth had a minor injury concern in the build-up to Cheltenham but he dispelled any fears with a commanding win at Wincanton last time out and is the one to catch at 5/2 with Bet365.

The Queen Mother Champion Chase may be the main event on Ladies Day but, in truth, it’s not much of a betting heat this year. That’s because Douvan is available at just 1/4 with Bet365 to get the win. It may be a short price but you can’t say it underplays the chance of the Willie Mullins-trained seven-year-old.

Depending on your outlook, the fact that the Champion Bumper is a much more open affair is either exciting or frustrating.

The only flat race at Cheltenham, the Champion Bumper has been the breeding ground for future National Hunt talent in the past and there are some impressive young horses in the field for the 2017 renewal.

Carter McKay heads the betting but there are two horses worth backing each-way who can come up with the goods, both at 16/1 with Bet365.

The first is Zaheer who has plenty of improvement in him after a lengthy injury layoff and the second is Redhotfillypeppers who was impressive when making her debut under rules at Punchestown and will improve for that experience. 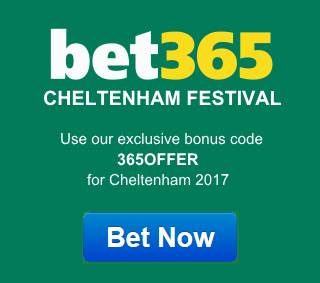 Yes, we know that St Patrick’s Day is on Friday this year, but Cheltenham traditionally celebrates all things Irish on a Thursday and it’s no different this week. With plenty of green around and the Guinness flowing, there’s also some great racing to enjoy.

The pick of the action is the Stayers’ Hurdle which goes off at 15:30. The Grade 1 is run over three miles and therefore requires more stamina than is usual for a hurdle race. That means we’re looking for a particular type of horse to win and we think we’ve found him in Ballyoptic.

The main concern about the seven-year-old is that he’s been beaten by the bookies’ favourite for the Stayers’ Hurdle, Unowhatimeanharry. However, he’s been a little unlucky with falls which dented his confidence somewhat.

Ballyoptic’s jumping looked much better last time out and there’s little question that the slightly firmer ground at Cheltenham is going to suit him. Nigel Twiston-Davies is confident about Ballyoptic’s chances and we like the price of 16/1 that Bet365 are quoting.

You could hardly claim that the first three days at Cheltenham are just the build-up to Friday but there’s no doubt that the Gold Cup is the biggest race of the lot. At the start of the race, three miles, two-and-a-half furlongs and 22 fences stand between the horses and having their name forever etched into history as a Gold Cup champion.

Punters were almost as disappointed as Colin Tizzard to see that Thistlecrack was ruled out of the Gold Cup through injury but Tizzard will fancy his chances with Cue Card. The one we’re most excited about, however, is Djakadam.

The eight-year-old agonisingly finished second in both 2015 and 2016 but with some of his toughest rivals missing this year’s renewal, this could be the time for the Willie Mullins-trained horse to go one better and win.

He is a consistent performer who’s shown an ability to compete against top class opposition on different types of ground. Mullins believes that his charge is improving all the time and his maturity will serve him very well at 4/1 with Bet365.