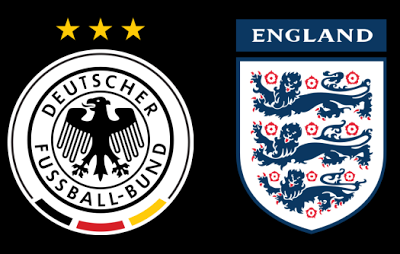 There’s a full round of fixtures in UEFA World Cup qualifying coming up next weekend but before the serious action begins Europe’s international managers get the chance to experiment a little with some interesting friendlies.

For England, that means a trip to Dortmund to take on old rivals Germany.

Gareth Southgate’s squad for the match includes mainly tried and tested options at the back but there were a couple of surprises in attacking positions. For one, Theo Walcott has been omitted despite scoring 17 goals in all competitions for Arsenal this season. Walcott’s loss was Jermain Defoe’s gain though as the 34-year-old Sunderland striker has been recalled having not featured for his country since 2013.

The uncapped quartet of Michael Keane, James Ward-Prowse, Nathan Redmond and Michail Antonio have all been given the chance to shine in front of the England coaching set up although the injury to Harry Kane does leave the Three Lions looking a little short up front.

Germany manager, Joachim Löw, has been experimenting with his squad in recent months but he’s chosen a particularly strong group for the England game. Four players based in England have made the cut including Manchester City’s Leroy Sane while ex-Arsenal striker Lukas Podolski will win his final cap against the Three Lions.

Wednesday night’s fixture in Dortmund takes place almost exactly a year after England last took on Die Mannschaft in Germany. That night the home side took a 2-0 lead just before the hour mark but England were anything but beaten. Harry Kane pulled one back before Jamie Vardy and Eric Dier scored their first international goals to complete a remarkable comeback.

England’s 3-2 win inflated expectations ahead of the European Championships. There’s nothing new about the English press getting worked up about the nation’s chances at a major tournament and, indeed, nothing new about England failing miserably. However, the nature of England’s dismissal from Euro 2016 – a humiliating defeat against Iceland – felt like a new low for the Three Lions.

Gareth Southgate may be an inexperienced manager at international level but he’s got enough about him to know that England are going through a rebuilding process. He, along with the FA and his coaches, must instill a style of play and identity on the players.

A footballing identity is something which Germany don’t struggle with. With Löw extending his contract to 2020, Germany could well have one manager in place for the best part of 14 years. When you consider Löw was assistant manager for two years before taking full charge in 2006, it’s no surprise that players know exactly what is expected of them when they get the call up to the national side.

Whereas England are a work in progress, Germany are a well oiled machine. At a best price of 9/11 with 888Sport, the home side should exact revenge for last year’s defeat.

There is no doubt that Harry Kane is England’s best striker. The 23-year-old has gone from a fringe player at Tottenham to England’s first choice number nine and his absence from this current squad is sure to hurt the Three Lions.

Defoe, Rashford and Vardy have all hit some form of late but none of them offer the same combination of strength, pace and finishing ability as Kane. The German defence know exactly what can happen if they switch off against England and are sure to have learnt their lessons from last year’s game in Berlin.

Expect the home side to keep things tight at the back whilst making the most of their world class attacking options. Germany’s combination of experience and youth is sure to get the better of England’s defence at times so a bet on the 2-0 correct score looks a decent price at 15/2 with Betfred.

Timo Werner is one of the most intriguing players in this Germany squad. The 21-year-old has caught the eye of some of Europe’s biggest clubs with his goalscoring exploits for RB Leipzig and is fully deserving of his place in Löw’s squad.

It remains to be seen whether Werner has been included to start of whether Löw just wants to take a closer look at him. If he does get the nod to start against England, his price of 11/2 to score first with Betfred could well be worth taking.