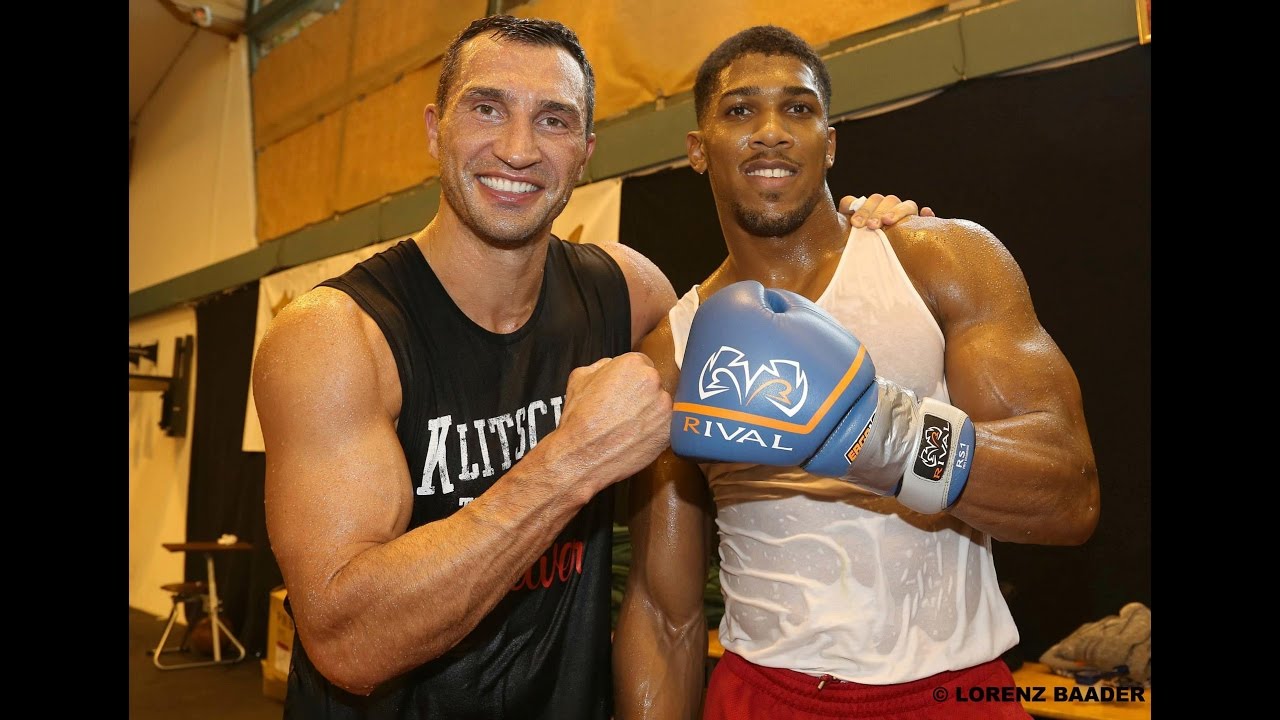 Ever since Anthony Joshua won heavyweight gold at the 2012 London Olympics great things have been expected of the Watford born fighter. Even at a time when British boxing is in rude health, Joshua stands both literally and figuratively above his his fellow countrymen as Britain’s bona fide superstar.

On Saturday, Joshua has the chance to take the step from promising youngster to world class talent when he takes on Wladimir Klitschko at Wembley Stadium. The fight is set to break box office records and could net both men as much as £15 million with 90,000 fans in attendance.

The figures involved are mind blowing but they’re of secondary concern to Joshua and Klitschko. They’re looking for their place in history.

For Joshua, that means announcing himself as the premier heavyweight boxer in the world by winning the biggest fight of his career by some distance. Klitschko, meanwhile, wants to prove that neither his age (he’s 41 now) or the 17 month gap since his last fight (a surprise loss to Tyson Fury) are big enough impediments to stop him returning to the top of the world.

The combination of Joshua’s phenomenal power, lightning speed and the 14-year age gap between the two fighters are all factors in making Joshua the odds on favourite. You cannot doubt Joshua’s quality but there is a real danger that this fight has come too soon for the 27-year-old.

Joshua turned pro with a very clear plan. Alongside his training team and trainer Eddie Hearn, he decided to take things step by step. It all started fairly sedately with some routine wins as he got used to the professional ranks and all that goes with it. Joshua’s last four opponents represented a step up in quality but, let’s be honest, none of them would stand a chance against Klitschko. We’ve seen glimpses of world class talent but nothing that Joshua’s done in the ring makes you fully confident about him beating a fighter of Klitschko’s class.

Tyson Fury’s shock win over Klitschko started a chain of events that would ultimately lead to this weekend’s fight. It also, inevitably, led to some people claiming that the Ukrainian is over the hill and no longer at home at the top level of boxing. We’ll learn the truth of that come Saturday night but you surely can’t read too much into the Fury loss.

Fury is a law onto himself in so many ways, especially in the ring where his unique style is incredibly difficult to prepare for. Joshua’s technique is much more orthodox and he’s even trained with Klitschko in the past so the hugely experienced challenger will know exactly what he’s going to face.

Joshua may become one of the best ever. Klitschko already is. Which means the challenger must be considered betting value at 9/4 with Bet365.

One of the main causes of concern for Joshua fans is that he’s never gone beyond seven rounds. Of course, that tells you that all of his wins have come via knockout but it also raises questions about his conditioning as it’s simply never really been tested. If Joshua wins this fight it will surely be via a knockout. That’s certainly how the bookies see it with a Joshua KO or TKO priced at 8/11 with Paddy Power.

Klitschko, though, will do all he can to avoid Joshua’s power in the early rounds. He’s a wily competitor who knows his chances of winning increase the longer the fight goes on. Klitschko’s more than capable of stringing this out to a decision and is 7/1 to win via the judges’ scorecards with Bet365.

As you can tell by the odds, the bookies believe that Joshua’s chances of getting the win lie with the earlier rounds. The home favourite has a chance if he can capitalise on any ring rustiness on the part of Klitschko but the big Ukrainian doesn’t enter the ring unless he’s in tip-top shape. The bookies don’t fancy Klitschko’s chances of seriously testing Joshua’s chin and we agree that his best chance of winning is on points at 7/1 with Bet365.

Wladimir Klitschko to win at 9/4 with Bet365

Wladimir Klitschko on points at 7/1 with Bet365

Betting Offer for Joshua vs Klitschko

If you are looking for a betting offer for the fight, then why not take up Coral’s offer of 25/1 for Joshua to win, enhanced from his current 2/5 price at Coral.

Anthony Joshua vs Carlos Takam - Get huge enhanced odds of 25/1 for Joshua to win his fight on Saturday night.
Reveal Code

Once signed up, place your FIRST real money bet of £/€1 on ‘Joshua to win - 25/1’ in the My Markets section. If your bet wins, you will be paid out at the enhanced odds shown within 24 hours, if your bet loses you'll get a £5 free bet in your account!