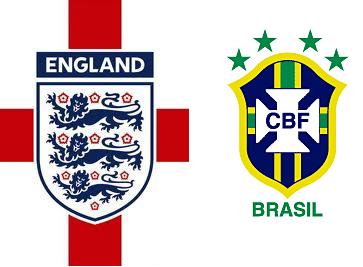 England have been stuck in a loop in recent years. The Three Lions habitually qualify for major international tournaments with relative ease before going on to fail miserably when it really matters. Having guided England to the World Cup thanks to topping Group F, Gareth Southgate is the latest man to be tasked with ensuring a more positive outcome against the world’s best.

To help Southgate prepare his players for their trip to Russia, the FA announced some tough friendlies including Friday’s game against Germany and Tuesday’s encounter with Brazil. Unfortunately, a host of first team players pulled out of the squad for the two matches as they decided not to risk their fitness with the hectic domestic Christmas schedule just around the corner.

That left Southgate with a combination of young and fringe players to work with. While they acquitted themselves well against a similarly second string Germany side, they’re in for a much tougher test against a star studded Brazil. The seleção saw off a spirited Japan team 3-1 in Lille on Friday and will be confident of putting another show in front of a bumper crowd at Wembley Stadium.

Although Southgate was without many of his first team players against Germany, it wasn’t all bad news for the England manager. Having decided to nail his colours to the mast and play three centre-backs, Southgate will be impressed by the way his young players grew into the formation as the game went on. He also got a chance to look at impressive young players like Ruben Loftus-Cheek, Tammy Abraham and Jordan Pickford, each of whom caught the eye and could sneak a place on the plane to Russia.

In truth though, it wasn’t much of a match. England fashioned few chances and Pickford was relatively quiet. The Everton goalkeeper will surely be much busier against a Brazil side including Neymar, Gabriel Jesus and Philippe Coutinho.

While England have arranged friendlies to test themselves against strong opponents, Brazil tend to travel the world, entertaining big crowds. They’ll certainly get a big crowd in North West London on Tuesday and with the calibre of player available to Brazil manager, Tite, the entertainment part should take care of itself.

Southgate will expect his relatively inexperienced team to put up a fight against Brazil but this could be one of those friendlies where the lessons learned are more important than the actual result. Brazil are the worthy favourites and should secure the win at 4/5 with Ladbrokes.

Brazil, like England, qualified for the World Cup with relative ease. After their disastrous exit of the 2014 World Cup which they hosted, there is a growing confidence about the seleção’s chances in Russia. As well as qualifying in style, Brazil have also generally played well in their friendlies, scoring at least two goals in four of their last six.

Tite said that he would be treating the friendlies against Japan and England as if they were World Cup matches which means you can expect another strong starting XI at Wembley. It also means they’ll look to end England’s resistance with a flurry of early attacking play just like they did against Japan.

The England fans who head to Wembley may well be disappointed by the result but they should see plenty of goals. If you want to take advantage of an exciting Brazilian performance, a bet on the Brazil 3-1 correct score at 14/1 with William Hill could pay dividends.

With all due respect to Dominic Calvert-Lewin and Jamie Vardy, they don’t quite have the wow factor that the Brazilian players with whom they share the top of the First Goalscorer market have. Additionally, the England forwards will likely have to make the most of limited chances in front of goal while Brazil should get the ball into dangerous positions several times.

Neymar, the bookies’ favourite to score first, would love to repay Tite for the support the Brazil manager showed him after the Japan game but the value bet could well be Gabriel Jesus at 19/5 with 888Sport. Jesus has dealt with the move to the Premier League incredibly well and he’s showing little sign of stress as he looks to cement his place in the Brazil starting XI for the World Cup.

Brazil to win at 4/5 with Ladbrokes

Gabriel Jesus to score first at 19/5 with 888Sport