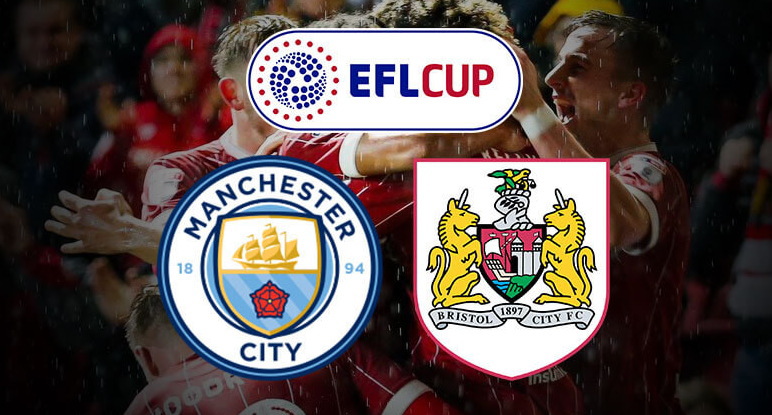 The early stages of the Carabao Cup are fairly low down on the list of priorities for managers in the Premier League and Championship. The money, the kudos and the futures of managers are tied up in the league and it’s no surprise that’s where they focus their attention. Things get a bit different in the semi finals though.

A two-legged semi final is all that stands between the four remaining teams and a cup final at Wembley Stadium. That’s a big draw even for every manager and it will certainly excite Pep Guardiola and Lee Johnson before their meeting at the Etihad Stadium on Tuesday night.

Man City have been lauded as one of the best teams in Europe in recent months but the fact remains that they are yet to actually win anything under Guardiola. He’ll be very keen to put that to bed with Carabao Cup success but must navigate a route past a Bristol City side who have already beaten four Premier League sides to make it to the semi final.

It all started relatively easily for Bristol City. They thrashed Plymouth 5-0 in the Carabao Cup first round which was impressive enough but that was nothing compared to beating Watford 3-2 at Vicarage Road and then Stoke 2-0, Crystal Palace 4-1 and Man Utd 2-1 all at Ashton Gate.

Johnson was delighted with the way his players applied themselves in those matches but he’ll be even happier that the Robins are just two points shy of the automatic promotion places with half the Championship season gone. Having made big changes to his team for the FA Cup match against Watford, Johnson is set to play his strongest possible XI at the Etihad but do they have any chance of avoiding defeat?

Well, the Robins can take heart that fellow Championship side Wolves are one of only three English teams to hold Man City to a draw this season. However, Bristol City have lost three on the trot in all competitions while Man City will be doing all they can to put the result of the tie to bed in the first leg. The away side may be happy enough with a low scoring defeat to keep their hopes alive of turning it around at Ashton Gate but we think Man City will have too much for them.

Anything other than a Man City win will go down as a shock but at a best price of 1/7 with Coral there’s little point in backing the home side. Rather, it may pay to take a chance in the Correct Score market.

That the Man City 4-0 scoreline is available at shorter odds than Man City 1-0 tells you all you need to know about how the bookies are viewing the match. The Citizens showed their attacking power once again on Saturday when they recovered from a 1-0 half time deficit to beat Burnley 4-1. Anything like that sort of attacking threat going forwards may well mean a very tough evening for Bristol City.

As touched on above, Guardiola wants that first trophy to mark his team’s domestic dominance over the last five months or so but he’s equally keen to ensure that his players don’t overdo it after such a busy period. Bristol City will offer stiff resistance at times but the home side should be comfortable after 90 minutes so we recommend betting on the Man City 3-0 correct score at 6/1 with Bet365.

Guardiola has played a combination of first team regulars and players on the fringes of the first team so far in the Carabao Cup. Therefore, the top of the First Goalscorer market includes big names like Sergio Aguero and Raheem Sterling and a smattering of young Man City players like Lukas Nmecha and Brahim Diaz.

Of all those players looking to prove they deserve to start in the big matches, Bernardo Silva will be particularly keen to shine against Bristol City. Although he’s yet to cement his place in the team, Guardiola trusted Silva enough to play him up front against Leicester in the Carabao Cup. Wherever the Portuguese starts on Tuesday, he’s got the quality and the desire to make grab the game by the scruff of the neck and score first at 7/1 with Sportingbet.

Bernardo Silva to score first at 7/1 with Sportingbet