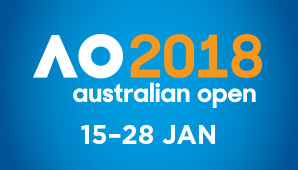 We’re at the stage of winter in Britain where it’s hard to imagine ever walking down the street in a t-shirt and shorts let alone what 37C feels like. And yet, that’s what thousands of tennis fans are experiencing right now as they arrive in Melbourne for the Australian Open.

For those competing in Melbourne Park, dealing with extreme heat is just another challenge to overcome. Tennis is arguably the most physically demanding sport to play at the top level when you consider all the intense sprinting, how often they play and the thousands of miles of travel.

All that effort took its toll on several players at the end of 2017 and many are either still recovering or not competing in Melbourne. Andy Murray is out until the grass court season at the earliest after hip surgery and Serena Williams is not yet at peak fitness following the birth of her daughter in September.

Big losses as those two are, there is always somebody waiting to take advantage. There are multiple potential winners in the men’s and women’s tournaments which means some great betting value for punters. So, here are our picks for the 2018 Australian Open.

At 35, many tennis fans believed that Roger Federer’s days of winning Grand Slams were behind him ahead of the 2017 Australian Open. Those doubters aren’t making the same noises 12 months on. The 36-year-old is the bookies’ favourite to lift the Norman Brookes Challenge Cup this year and for good reason.

Federer understands that he cannot subject himself to the rigours of a full tennis season any more. The way that he carefully scheduled his appearances last year helped him to remain competitive at the very highest levels and judging by his movement at the Hopman Cup a fortnight ago, he’s ready to go. In terms of his technique, nobody in the game is as adept playing on courts that are as fast as those in Melbourne. Federer will attack and the net and defend with pinpoint slice shots – a combination that could well see him defend his title at 15/8 with Coral.

If you’re looking for an option at bigger odds in the men’s draw, look no further than Nick Kyrgios. The Australian has his first taste of ATP success on home soil last at the recent Brisbane Open. If he can repeat that level of tennis and remain calm under the pressure of playing in front of a home crowd, Kyrgios could well spring a surprise at 16/1 with Sportingbet.

Roger Federer wasn’t the only tennis player to surprise everybody with his results last year. Angelique Kerber also raised eyebrows but unfortunately for all the wrong reasons. After winning the Australian Open and Wimbledon in 2016 Kerber sat at the top of the world rankings but for some reason she was unable to live up to her billing in 2017.

Whether it was technical deficiency or simply an inability to live up to the weight of expectation on her shoulders, Kerber struggled big time and realised that things had to change in the off-season. So, she made changes to her coaching staff including the hiring of Wim Fissette as her head coach. The Belgian has had a positive influence on a slew of world class players and the early indications are that the pair will form a formidable partnership.

Kerber has improved her world ranking to 12 thanks to reaching the final of the Hopman Cup with Alexander Zverev and some quality tennis in Sydney. Everything is pointing towards Kerber finding her best tennis again which makes her a very tempting betting option at 11/1 with Coral.

Make no mistake though, Kerber has some incredibly stiff competition. You could make a convincing case for as many as 20 players in the women’s draw but of them all, the best value for an each-way bet may well be CoCo Vandeweghe.

The 26-year-old has long been thought of as a potential Grand Slam winner but it’s only in the last six months or so that she’s started to convince the doubters. Much of Vandeweghe’s improvement can be credited to her coach, Pat Cash. The Aussie legend has developed a strong relationship with Vandeweghe and has improved her technically and mentally. At 22/1 with William Hill, Vandeweghe looks a great price to go better than last year when she made the semis in Melbourne.

Roger Federer to win at 15/8 with Coral

Nick Kyrgios each-way at 16/1 with Sportingbet

Angelique Kerber to win at 11/1 with Coral