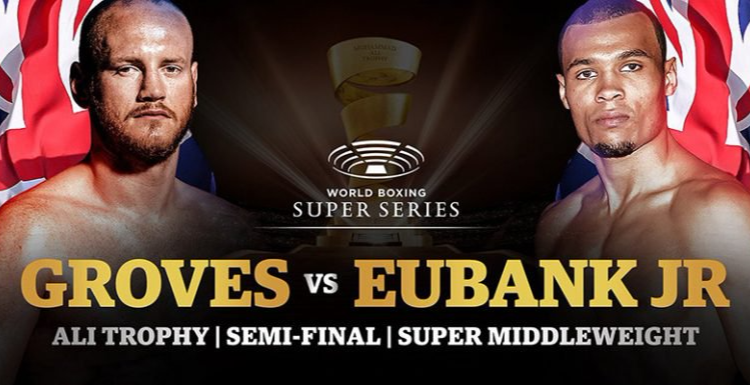 The World Boxing Super Series has proven to be a wonderful innovation. It’s brought real excitement to both the cruiserweight and super middleweight divisions but would not have been such a success were it not for the class of fighter found at those two weights.

The super middleweight tournament is of particular importance to British boxing fans. Callum Smith has set up an intriguing semi-final with Jürgen Brähmer but it’s the other semi, between George Groves and Chris Eubank Jr, that’s really set pulses racing.

Tickets for the bout at the Manchester Arena sold out in less than 10 minutes while ITV Box Office are confident big numbers will watch the fight on TV and their streaming service. Both men won their quarter-final fights via knockout and fans are hoping for more fireworks on Saturday night.

Chris Eubank Jr is the odds on favourite across the board with the bookies but it’s George Groves who went into the super middleweight World Boxing Super Series as the number one seed. That’s due to the fact that he’s the only major champion of the eight contenders having finally putting an end to his hunt for a world title last May.

The general consensus seems to be that the work rate of Eubank Jr will make the difference against Groves. The Hove fighter prides himself on his conditioning, prioritising it over sheer size and power and the general consensus is that Eubank’s ability to finish strongly will swing the fight his way.

While Groves is well known for his impressive early flourishes, he has a reputation for fading in the latter stages. However, the 29-year-old has gone 12 rounds six times losing just once to Badou Jack. Eubank Jr’s only professional loss came after a sluggish start against Billy Joe Saunders. Although he came back strongly, it wasn’t enough and we could see something similar on Saturday night.

Groves has the conditioning and the experience to keep something in reserve for the later rounds, even if he starts well. The middle rounds will be vital, providing Groves works his jab well and keeps Eubank Jr from landing combinations, the underdog can show his class and defend his WBA world title at 6/4 with Bet365.

If Groves does get the win at the Manchester Arena it’s highly unlikely to come in the same devastating fashion with which he dispatched of Jamie Cox in his World Boxing Super Series quarter-final. Eubank Jr is simply too good and savvy to walk into anything too damaging early on. The Eubank camp will be expecting a typically fast Groves start and will prepare accordingly.

For Groves’ part, he’d obviously take an early knockout but his work in the first few rounds will be more about getting ahead on the judges’ scorecards than anything else. The most likely winner in the Method of Victory market is Groves winning by decision or technical decision at 5/1 with 888Sport. However, if you’re looking for a bigger pay out than you’d get on Groves to win, it could be worth taking a bigger risk in the Round Betting Market.

The Groves on points option will see plenty of support from punters but you can get 40/1 with Ladbrokes on Groves winning in the 11th round. That’s a very tempting price indeed.

If this fight plays out to form, there is every chance that Eubank Jr will be behind on the scorecards in come the halfway stage. He’ll be desperate not to lose another huge fight after the Saunders disappointment and could take an ultra aggressive approach to the final few rounds as he bids to take the decision out of the judges’ hands.