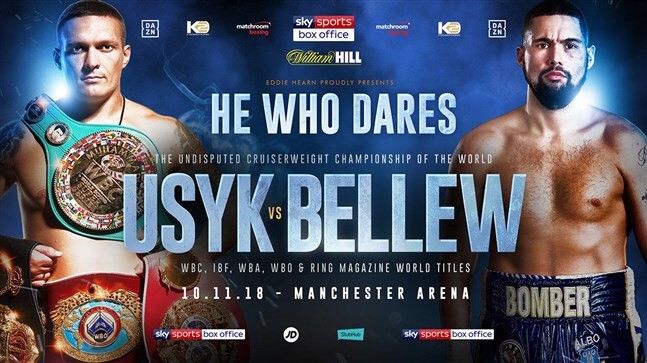 Tony Bellew is one of those sportspeople who really resonates with fans. Too often the stars we see on our televisions from any number of sports appear aloof and their stories difficult to relate to. That is not the case with Bellew who has made it very clear during his career that he is a prize fighter because he wants to provide for his family.

The 35-year-old has had some massive pay cheques in recent years as he’s ascended to the top of the cruiserweight division and scored some very big wins at heavyweight. Bellew has hinted that his fight against Oleksandr Usyk on Saturday night will be the last of his career. The Liverpudlian is quoted as saying, “one more fight and then I can go and live a dream life with my family,” but don’t think that he is viewing this simply as a payday.

Bellew may be the heavy underdog with the bookies but he will approach this fight with the same levels of dedication and professionalism as ever. He’s even gone as far to claim that he can catch Usyk by surprise with his punch power and that the Ukranian is making a mistake by planning a future at heavyweight and not taking the fight at the Manchester Arena seriously enough.

Can Bellew bow out in style or will, as the odds suggest, Usyk remain the undisputed cruiserweight?

Oleksandr Usyk had an excellent amateur career as a heavyweight. The way that the professional fight game is, it’s understandable that Usyk wants to step up from cruiserweight and is desperate for a crack at Anthony Joshua. In the early stages of negotiations it appeared as though Usyk wanted to use Bellew as a stepping stone in the heavyweight division but the Liverpudlian was having none of it.

As well as the guarantee of financial security for the rest of his life, Bellew was tempted back into the ring by the chance to win all four cruiserweight world titles. He’s gone as far as to claim that he’s foolish in taking the fight and that’s certainly borne out by the odds.

The best price you’ll get on Usyk is the 1/6 that William Hill are offering. That shows the size of the task facing Bellew against the man who unified the cruiserweight division during his successful run through the World Boxing Super Series. The home fighter will have a huge amount of support at the Manchester Arena but Usyk is used to fighting in tough atmospheres were the bulk of the fans are pulling for the other fighter and we think he’ll secure another big win on the road.

The problem is, there isn’t much point in backing Usyk at such heavy odds-on. Instead, we’re going to have to get a little more creative with our betting tips.

Bellew raised a few eyebrows in the build up to this fight by suggesting that he almost hopes Usyk beats the fight out of him. Clearly, no fighter wants to be pummelled and Bellew has spoken of his pride at being able to retire from fighting on his own terms but he is worried about the prospect of winning the fight with ease at that would almost mandate him rowing back on his decision to retire.

That’s not a worry that’s going to come to fruition. Bellew is a big hitter and an incredible competitor but the best he can realistically hope for is to take this fight the distance. Both fighters have done a huge amount of work to cut the weight and turn up in peak physical condition so the fight could well go to the judges. If it does, the 15/8 that Coral are quoting on Usyk winning by decision or technical decision will look very generous indeed.

If you are considering a longer odds bet or have a free bet to use for the fight, it could pay to have a speculative bet or two in the Round Betting market. Usyk has won most of his recent fights by decision but he was something of a knockout artist in the earlier stages of his professional career so a bet on him winning in Round 10 could be tempting at 16/1 with William Hill.

Those hoping for a fairytale win early doors for Bellew can get 80/1 with Ladbrokes on the Englishman winning in Round 2.