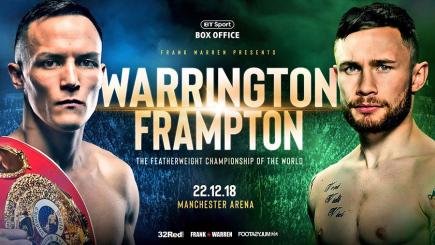 Josh Warrington knows a thing or two about being the boxing underdog. The Leeds based fighter was very much the underdog in the betting for his last fight but made the most of the chance to fight in front of a home crowd to beat Lee Selby. That mixed decision victory saw Warrington finally win a world title having worked his way up the ranks by winning belts at English, British, Commonwealth and European level.

Warrington’s first job as a world champion is to defend his IBF featherweight title against Carl Frampton in the Manchester Arena. The 28-year-old said that winning the IBF title would give him the chance to “show everyone that I’m the best featherweight in the UK and propel myself onto the world level.” A win over Frampton would certainly do that but the bookies are unconvinced about Warrington’s chances.

Frampton goes into Saturday night’s fight as the odds on favourite across the board. The Northern Irishman has already proven himself at the top level having held world titles at both featherweight and super-bantamweight level and has plenty of motivation. As well as wanting a third fight against Leo Santa Cruz (the only man to have beaten Frampton) the Belfast fighter has called Warrington’s prediction of a knockout arrogant and outrageous. Will the favourite be able to justify his status in the betting and make Warrington’s time as a world champion a short one?

The bookies are having no trouble separating these two fighters. Warrington may be the man with the unbeaten record but there is no doubt that Frampton has fought at a higher level and any other result than a win for the Northern Irishman would have to go down as a surprise.

There are reasons for those who back Frampton to win at a best price of 4/9 with Coral to be concerned. He will be giving up two inches in height and five inches in reach compared to Warrington whilst the English fighter will have great levels of support in the Manchester Arena. However, Frampton has no problems doing things the hard way. He fought Santa Cruz twice in America, beat Scott Quigg in Manchester and beat the Mexican, Alejandro Gonzalez Jr. in El Paso, Texas.

Frampton is also used to being the smaller man. He makes up for his relatively lack of stature with a tremendous amount of power. 15 of his 26 wins came via stoppage and his punch power will doubtless cause Warrington all manner of different problems. Expect Warrington to be very busy and effective in the early rounds but Frampton’s power and class will eventually tell so a bet on the favourite very much looks in order.

Becoming a world champion has done great things for Warrington’s confidence but there is surely a certain amount of bluster behind his pre-fight predictions of a knockout. The vast majority of Warrington’s fights have gone the distance and it’s very hard to imagine that he’ll stop Frampton inside the distance. The same is not true the other way around.

Frampton’s power is a major weapon. Combined with his conditioning it throws up the genuine prospect of the challenger winning the fight by knockout, technical knockout or even disqualification at generous odds of 10/3 with Paddy Power.

If Frampton is to win this fight inside the distance it’s unlikely to be one big punch that ends things. It’s much more likely that the Northern Irishman’s relentlessness and superb boxing class eventually wears Warrington down forcing either the referee or his corner to bring the fight to an end. Therefore, if you’re getting involved in a speculative bet regarding which round the fight will end ignore the big odds available on the earlier rounds. Instead consider the 22/1 that William Hill are quoting on Frampton winning in the ninth round.

Carl Frampton to win at 4/9 with Coral

Frampton to win by knockout, technical knockout or disqualification at 10/3 with Paddy Power