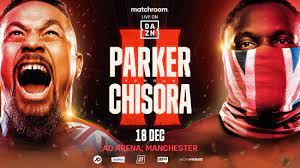 It was difficult to tell whether Joseph Parker and Derek Chisora liked each other or not in the build up to their fight in May. At times the two heavyweights seemed remarkably cordial but at others they were at each other’s throats about silly things such as who would enter the ring first.

The mutual respect was, however, obvious when the fight had ended. Parker immediately agreed to Chisora’s insistence on a rematch despite it not being stipulated in the contract. Chisora was very unhappy to lose on a split decision and Parker agreed that his opponent had done enough to warrant another crack.

That rematch comes in Manchester’s MEN Arena on Saturday night.

Although Parker was floored by Chisora in the first round back in May and struggled to cope with the British fighter’s brawling style the betting odds suggest that a reversal of the decision is a big ask. Chisora is an incredibly hardened fighter but even he will need to muster an enormous effort to go to the well once more just over a week before his 38th birthday against a former world heavyweight champion.

There is no question that Chisora will give everything he has and will have the support of the British crowd. There are, however, lots of questions about whether his all is enough to seriously challenge his classy opponent.

Chisora changed coaches ahead of May’s fight, hopeful that fresh impetus would give him an edge. For all that he was happy with the work he did with Buddy McGirt, it was in many ways a typical performance from the Londoner. He does not shirk a challenge and looked to take the fight to Parker whenever possible.

In contrast, Parker is more of a backfoot fighter. While he did appear taken aback by Chisora’s aggression at times, Parker steadily took control of the fight and was much the stronger of the two in the latter rounds. It was a strategy that worked in May and Parker is likely to take a similar approach on Saturday even though he has bulked up in between fights so theoretically carries more punch power into the rematch.

At a best price of 2/5 with Ladbrokes, Parker is a very clear favourite. He is the younger man, has the greater record of the two fighters and will be presented with no surprises when he gets into the ring with Chisora again. The presence of fans is another challenge for Parker to deal with as the ‘away’ fighter but he is the right favourite and it would be a real upset were he not to secure the win.

The only problem with backing Parker to win on Saturday night is the price. Thankfully, there is a better option in the Method of Victory market where Parker can be supported to win by decision at 6/4 with bet365.

Chisora has recently questioned the way that judges are scoring fights and even questioned Parker’s desire in a fairly transparent attempt to rile his opponent up. Parker is experienced enough and has a cool enough head not to bite at attempts to coax him away from his gameplan. He may well have more power and be talking up his chances of a knockout win but there is no chance that he will take his eye off the ball in an attempt to force things.

Neither fighter will turn down the chance to burst through their opponent’s defences if such an opportunity presents itself but Parker will look to ensure this is a slow burner of a fight and that he can do enough over the 12 rounds to convince the judges once again.

If you do fancy some fireworks in Manchester then the Round Betting market is the place to turn as you can profit handsomely by correctly predicting which fighter will end the fight with a knockout and in which round.

Chisora thought for a split second that he had secured a first round knockout in the first fight and he can be backed at 80/1 with bet365 to go one better than a knockdown and end the contest as early as possible on Saturday. Parker will do all he can to ensure he doesn’t fall foul of any early missteps this time around though.

If there is to be a knockout blow landed it is much more likely to come in the late rounds as either Parker wears down Chisora’s resistance or Chisora connects with a big punch as he tries to take the judges’ job away from them.