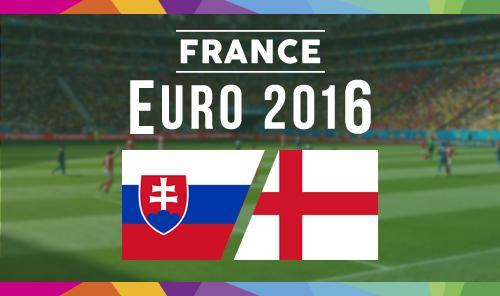 At half time of England’s game against Wales there was a familiar, unwelcome feeling amongst all fans of the Three Lions. England were losing 1-0 and staring at the prospect of falling at the group stage of another major international tournament. But, Roy Hodgson threw caution to the wind introducing three strikers onto the pitch during the second half and despite leaving it very, very late, England managed to secure a 2-1 win.

England are now top of Group B with their future firmly in their own hands. A win against Slovakia on Monday night will guarantee top spot in the group and an easier draw in the first knockout round of the competition. Slovakia’s performance against Russia showed that beating them will be much more than a mere formality even if England have a perfect record of three wins from three matches against Monday’s opposition.

England once again go into a Group B match as the odds-on favourites. They did fail to see out the win against Russia but in both of their previous matches England have played some very good football. Wayne Rooney seems to be relishing the chance to pull the strings from midfield while Danny Rose and Kyle Walker offer great overload options out wide from full-back. The best price that you’ll find on England is the 4/5 that Stan James are quoting which looks more than fair to us.

Those who were convinced enough by Slovakia’s performance against Russia to think that they can cause an upset can back Jan Kozak’s men to win at a tasty 5/1 with Bet365. In Marek Hamsik, Slovakia have one of the best players in the tournament and he will be backed up by players like Vladimir Weiss and Martin Skrtel who have top level experience. The draw’s not been completely written off at odds of 13/2 with BetVictor but it is going to take a consistently brilliant performance from Slovakia to stop England from winning.

Positive results for England dominate the top of the Correct Score market as you might expect. Anyway you look at it, England are the stronger side and they really should have enough about them to see the job through. However, Slovakia will be doing everything in their power to keep their tournament hopes alive. Kozak will have come up with a plan to try and get the ball to Hamsik as often as quickly as possible as this England defence have let in a goal in each game without really being tested.

England do have a perfect record against Slovakia but in two of those three games the Slovakians managed to score. Those two games both ended 2-1 to England and that looks like a very good bet for Monday night’s encounter. The best price you’ll find on England winning 2-1 is the 17/2 that Bet365 are quoting.

People who are expecting a draw will be tempted by BetVictor’s odds of 13/2 on the 1-1 scoreline while anybody who thinks the game is going to fizzle out into a non-event can bet on a 0-0 stalemate at 8/1 with Ladbrokes.

Roy Hodgson has some big selection decisions to make for both the Slovakia match and the rest of the tournament to come. He’s started the same 11 players in both of England’s games so far but there are sure to be changes on Monday night. For a start, Raheem Sterling (who is 10/1 to score first with Coral) looks well short of confidence. He missed a really good chance against Wales and received some pretty harsh words from sections of the England fanbase. With both Jamie Vardy and Daniel Sturridge coming off the bench to score against Wales it looks as though one of them will replace the Manchester City forward.

There are also major concerns about Harry Kane’s performances. Kane’s rise from the fringes of the Spurs squad to number one striker for England is remarkable but it does look as though he’s struggling to cope with the sheer amount of football that he’s played over the past couple of seasons. Kane is the favourite to open the scoring against Slovakia at 9/2 with Bet365 but the player to bet on is Vardy at 5/1 with Sky Bet. He looks the player most likely to force his way into the starting XI and his confidence levels could hardly be any higher.

Jamie Vardy to score first at 5/1 with Sky Bet