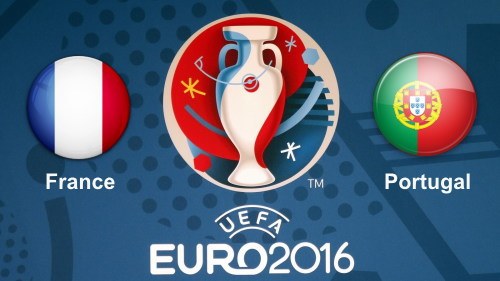 France are nominally the away side for the Euro 2016 final against Portugal but the Stade de France in Paris will be absolutely full to the brim of French fans hoping for another major triumph on home soil. Didier Deschamps is the France manager but 18 years ago he was part of the team that won the 1998 World Cup in the same stadium that his players will compete in on Sunday evening. That will give him a great insight into the stresses that his players will be going through.

Deschamps is in a great position to plan his side’s tactical approach but one thing he cannot control is the performance of Portugal. Fernando Santos’ men have, remarkably, only won one game inside 90 minutes at the tournament so far. They’ve had to rely on extra time and penalties to continue in their role of Euro 2016’s spoilers and you should not rule out the possibility of further late drama in the final.

This may not be the final that everybody was hoping for but with some of Europe’s best attacking talent on display, it could turn into a real classic.

France are the favourites for the match but their odds of 21/10 with 888Sport show the bookies think they will not find it easy to beat Portugal. The Portuguese may have only won once but they’ve not yet lost and will put up a stern resistance for France’s brilliant attacking players to navigate.

It remains to be seen whether Pepe can overcome the thigh injury which kept him out of the semi-final but even without the Real Madrid defender Portugal are a well organised team who have only conceded five goals all tournament (with three of those coming in the same game). Portugal will have no qualms about employing all the tricks of the trade to keep France at bay so if you are looking to bet on a France win, it may well be worth backing them to lift the trophy at 4/9 with Paddy Power rather than winning inside 90 minutes.

Everybody was swept away in the story surrounding Wales and if you went onto social media after they were knocked out you’d see Cristiano Ronaldo and company are far from the most popular team in the European Championships. Still, they are remarkably difficult to beat and if you think they can upset the hosts, they are available at a best price of 15/4 with Ladbrokes.

The top selections in the Correct Score Market suggest that the bookies believe this is going to be a tight, nervy affair which will not contain too many goals. That is backed up by the fact that the best price available on Under 2.5 Goals is the 1/2 that Betfred are offering.

There is a real chance that this game could go beyond the initial 90 minutes and if that happens, the most likely scoreline is 1-1. France have a whole host of goalscorers in their ranks while Portugal have Ronaldo, one of the best players of his generation and the likes of Nani, Renato Sanches and Ricardo Quaresma who have each scored in the tournament. A 0-0 draw is highly unlikely so have a bet on the match ending 1-1 at 6/1 with William Hill.

The First Goalscorer Market is one of the most competitive betting markets of the match with cases able to be made about a number of players.

Antoine Griezmann is the favourite to bag the game’s first goal for good reason. The Atletico Madrid forward was actually dropped by Deschamps after a below-par performance in France’s first game but as he head into the final, he is the tournament’s top goalscorer. Griezmann scored twice in the semi-final and is available at odds of 4/1 with Coral.

Olivier Giroud’s best game of the tournament came against Iceland. After being jeered earlier on, the Arsenal striker became the darling of the French public by netting twice. He will surely start in the final and can be backed at 5/1 with Coral to score first. Giroud will have plenty of backers at that price but not nearly as many as Cristiano Ronaldo. The Portugal talisman has long been told that he cannot be truly considered a great unless he fires his national team to a big win and this could well be his last opportunity for international glory. At odds of 11/2 with Paddy Power, Ronaldo can take advantage of any early French nerves to come up trumps on the big stage once more.

Cristiano Ronaldo to score first at 11/2 with Paddy Power

Coral have a new customer for the Euro 2016 final, you can get odds of 10/1 for France to win the match in 90 minutes.  This is for new accounts only so if you haven’t yet signed up with Coral then click the offer below to get involved!