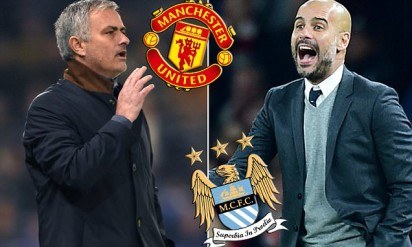 The Football League underwent a rebranding for the start of the season. Part of the reason for the rebranding was to ensure that the biggest clubs take the League Cup seriously. You’ve got to applaud their efforts but new logos and name changes do nothing to enhanced the reputation of a tournament as much as exciting football does.

Happily, the fixture gods are playing ball this year. We’ve already seen some brilliant matches in the new look EFL Cup and Wednesday night brings us an absolute cracker with a Manchester derby at Old Trafford.

Neither United nor City go into Wednesday’s game in particularly good shape.

United fought for a point against Liverpool and comfortably beat Fenerbahce but the 4-0 defeat against Chelsea badly damaged their pride. As for City, it’s now five games without a win as the side look to be struggling with some of Pep Guardiola’s tactical instructions.

With two managers desperate for silverware, we could be in for an absolute classic.

It’s a little over a month since the two Manchester clubs last met. Guardiola got the better of his old rival Jose Mourinho that day but the bookies have tentatively installed United as the favourites this time around.

There’s no doubt that a win would be very important for Mourinho and United. Mourinho also thinks highly of this competition. He’s made a concerted effort with the League Cup previously and lifted the trophy in each of his two spells as Chelsea manager. He knows there are bigger fish to fry so to speak but he views the League Cup as a good springboard to success.

Mourinho will be taking Wednesday’s match incredibly seriously but it’s not clear whether that’s going to be enough. United looked very leggy against Chelsea on Sunday and while City haven’t been great defensively, they’ve got more than enough attacking talent to exploit any sloppiness from the hosts.

United were happy playing the role of spoilers against Liverpool at Anfield but they won’t have the luxury of slipping into that negative mindset in front of their home fans. Mourinho will look to take advantage of City’s relatively poor defensive record but that could just open up more space for the away side to exploit. At odds of 17/10 with bet365, Man City look like the value bet in the outright market.

If you’re having a bet in the Correct Score market it makes good sense to pick a scoreline in which both teams score.

Man Utd were woeful in defence at Stamford Bridge. Their attempts to be more solid on Wednesday will be hurt by Eric Bailly’s injury. However, they have a wealth of attacking options.

On the flip side, City showed against both Barcelona and Southampton that they’ve got a real unfortunate knack of shooting themselves in the foot. Whether it’s defenders overplaying the ball or goalkeeping howlers, City cannot be trusted to keep a clean sheet.

Man Utd may well end up on the losing side of the derby match but they’ll surely be able to score at least. That makes the odds of 10/1 that Paddy Power are offering on Man City winning 2-1 look very generous.

Strange as it may sound, Sergio Aguero is currently having to prove himself to Guardiola. The diminutive Argentine has been one of the best strikers in the world for years now but his place at Man City seems to be under threat.

Aguero was benched for the Champions League game against Barcelona and was unable to make the difference against Southampton. Aguero doesn’t only have pressure in terms of fitting into the new manager’s way of doing things, but he’s being increasingly pressured by his young understudy, Kelechi Iheanacho.

The 20-year-old Nigerian took only 10 minutes to score after coming off the bench against Southampton and could well be given the nod to start at Old Trafford. He’s quick, he’s smart and he’s lethal when presented with an opportunity in the box. At best odds of 6/1 with Paddy Power, Iheanacho looks a smart bet to be the first goalscorer on Wednesday.

Man City to win at 9/5 with William Hill

Kelechi Iheanacho to score first at 6/1 with Paddy Power